Environmental Changes in their tank: 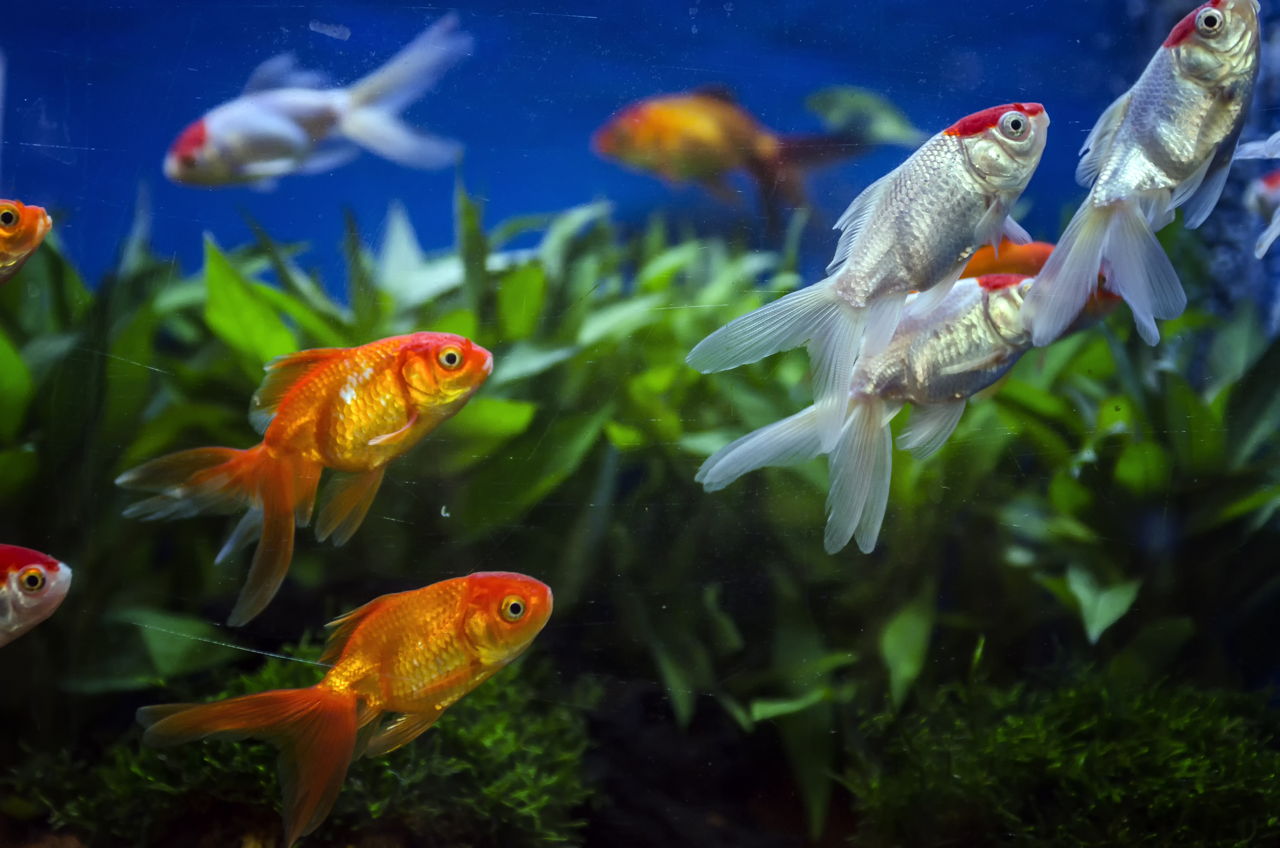 Environmental change in their tank is one of the most common causes of why your goldfish is turning white.

There are so many environmental factors that can cause your goldfish to lose its colors, such as water temperature, pH, hardness, the introduction of a new species, or the addition of decor, etc.

When any of these parameters go out of its range, can cause them to turn pale.

When you see your goldfish turning white, think if the process of last water changing was different from the usual, or water tank has been moved to a different location, or did you introduce any new species or added a new decor?

Another important cause for your goldfish turning pale is the dissolved oxygen level in the aquarium tank is low.

Low Dissolved Oxygen Level is caused by several factors, such as Over-population of the tank, higher water temperature, lack of aeration or poor aeration, excess algae growth in the tank, overfertilization, and nutrition, decomposing of plants matter, and the leftover food, etc.

This problem can be fixed by increasing the water flow or/and adding some air stones in the tank.

Cleaning the tank of decomposing organic matters such as the leftovers, plant matter, etc.; lowering the water temperature; adjusting the lighting, pH to the desired level helps to increase the dissolved oxygen level in the water.

If you have too many fishes and other aqua lives in your aquarium tank or pond than the recommendations, then the oxygen level in the tank will not be sufficient to support all the lives.

Overdosage of chemical compounds might affect the ability of the water to retain the dissolved oxygen.

If the low dissolved oxygen level in the water is the cause of why your goldfish turning white, the symptoms are:

Ammonia or ammonia spike could be a reason why your goldfish is turning white. If you see white or black patches on your fish, then test the water for ammonia. The ammonia level in the water should be 0 parts per million.

The presence of ammonia indicates the absence of bio media/beneficial enzymes in the tank environment. If the water sample reads any trace of ammonia, stop feeding your fish immediately, and increase the filtration cycle as ammonia is the first by-product in the nitrogen cycle. If possible, move the fishes to another tank and do the water change.

In case the reading shows the ammonia level 0, do a test for Calcium Carbonate in the water. If KH is over the recommended limit, add vinegar by premixing 0.5 – 1 tsp per gallon of water. Start with 0.5 tsp of vinegar/gallon and wait for an hour or so, test for KH, then again dilute some more vinegar till you bring it down in the range of 4 to 8 KH.

Lighting is one of the most common reasons why your goldfish is turning white or pale. Either they have too little or too much. The former is the most common and later when your aquarium is directly under sunlight.
For the goldfish to gain and retain its glowing orange-red/yellow color, 12 hours of sunlight or artificial lighting is essential. Lack of light promotes the production of melanin and impedes chromatophore production; the cell that is responsible for the color pigmentations like orange-red, yellow, etc.).
It is widespread knowledge amongst experienced hobbyists that the goldfish in the outdoor ponds have the most brilliant colors. It is because of their exposure to the full spectrum of natural light. You can make up to some extent with artificial full-spectrum LED lighting. Despite having 12 hours of LED lighting, expose them to natural sunlight often.
While exposing them to sunlight, take care not to over-expose or over-heat the tank. Overdose of light will have a similar effect as the lack thereof; over-heating will reduce the dissolved oxygen level in the water, which will turn the fish white and eventually suffocate them to death.
Exposing them to 12 hours of sunlight may not help them regain their color if the goldfish has turned white. However, it will help to save your goldfish from dying. If you have detected the problem at the early stage, then sunlight can help them regain their golden color. 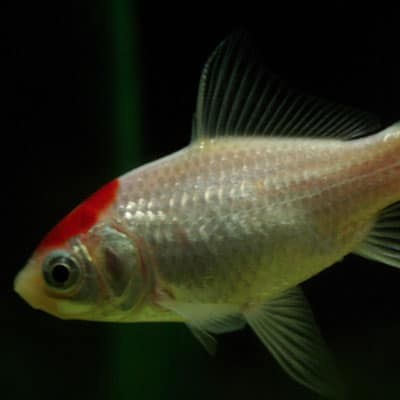 Improper diet is another culprit in turning your goldfish white. Your goldfish may not be getting the nutrient that needs to have the brilliance of its color.
Carotenoids are the source of orange-red and yellow pigmentations. Goldfish cannot produce their carotenoids; they derive carotenoids from the food they eat, such as spirulina, brine shrimp, spinach, carrots, peas, algae, etc.
The fish requires just the same as us, a balanced diet. Most of the fishes are omnivores that need both animal matter and plant matter.
The best way to make sure that your fish is getting all the nutrients they need is to buy some high-quality commercial food; you can even find some feed that is specifically promoted by the fish-feed industry to improve bright colors. Along with the high-quality commercial food, you can also feed them once or twice a week with brine shrimp, spinach, carrots, peas, etc.
NOTE: make sure to blanch your vegetables before feeding them.

Illness is the part you should get worried about. Most breeds of goldfish are sensitive to minor changes; this change can stress them, and the stressed fish becomes the ground for diseases and illness to manifest.

Goldfish turn pale and white when they are ill. When goldfish turning pale or white is only a consequence of the illnesses; then, you do need to worry about it.

There is no specific disease or illness that causes them to turn white. It is a trait that can accompany any disease.

You can identify if your goldfish is sick or not when them turning white is accompanied by one or more symptoms such as lethargy, lack of appetite, difficulty swimming, wandering around in the tank, growth on the scales, or fins, white spots.

Whitespot disease, or Ich, or fungal infection or parasite attack can cause these symptoms, including death.
Swim bladder disease is another common disease goldfish suffer. The symptoms of swim bladder diseases are erratic swimming erratic, swimming upside down, banging on the surface of the aquarium, and other decors, etc.

As soon as you notice any of the above symptoms, use a test kit to check your water for temperature, pH, dGH, and KH. Ammonia and nitrite should be 0; the nitrate level should be less than 20, ideally between 5 and 10.

If you find any variations in the water parameters, correct them as an immediate measure, and check for the lighting. Pay attention to the diet you have been providing your goldfish.

If everything seems to be what it should be, then definitely, you need to consult a vet, identify the disease, and treat it.

Genetics is the most ordinary reason why your goldfish is turning white: 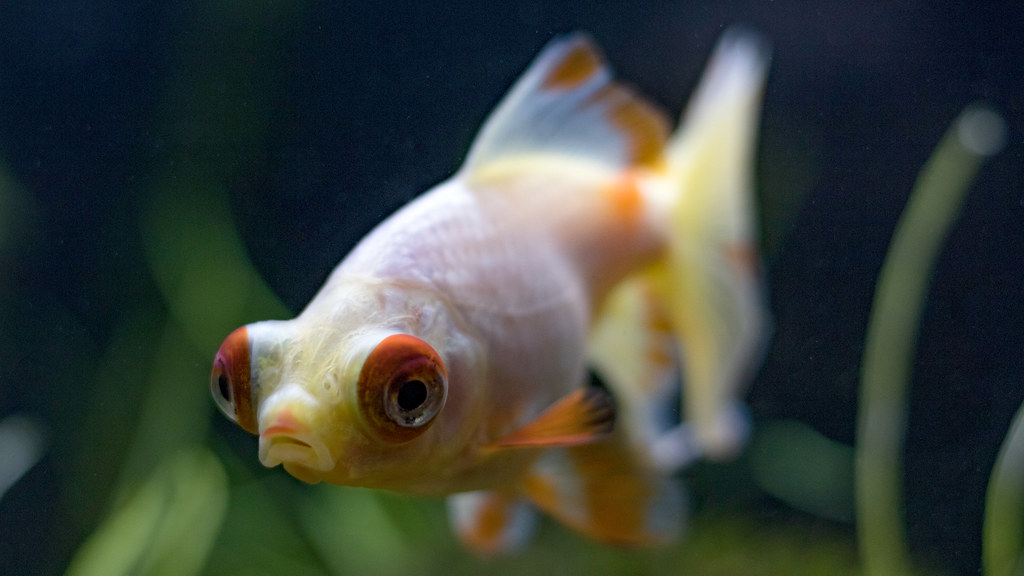 Goldfish are a relatively small member of the carp family, including Prussian Carp and Crucian Carp. In the wild, they were a dull grey or olive green color and were reared for food like most of the fishes by ancient Chinese. Goldfish was one of the common fishes eaten by ancient Chinese.

Let’s come to the issue of them turning white; goldfish that are not intensively selectively bred by the aquarium traders might lose it as it matures. It is pretty usual for a young goldfish with vibrant color to turn to silver or white as it mature. The change can happen within the first two years of their age.

If your goldfish loses its color slowly and you have verified the water parameters, lighting, and diet, then it is most likely that their genetics has come into play.

In this case, you will have to accept the goldfish as your whitefish!!!

Aging – A common reason why your goldfish is turning white:

A simple and straightforward reason for your goldfish turning white could be it is just its age.

Most multi-color goldfish evolves during the first two years of their age; it happens with even a solid pigment of yellow/orange scales.

Try to get information about the parent stock from your pet store. That can prepare you for what and when to expect changes in your fish.

You can see natural changes both in juveniles and the old fish (the average lifespan of goldfish is about 15 years).

When the changes happen slowly, either when they are juveniles or old age, then nothing to worry it is part of growing up and getting old.

However, the changes seem sudden then, maybe a cause for concern. You need to run the full test of your tank water, lighting, diet, changes in the environmental condition of the tank, etc., and take professional help if it is suffering from any illnesses.

Is there a chance for your goldfish to regain their golden yellow or orange/red color back? 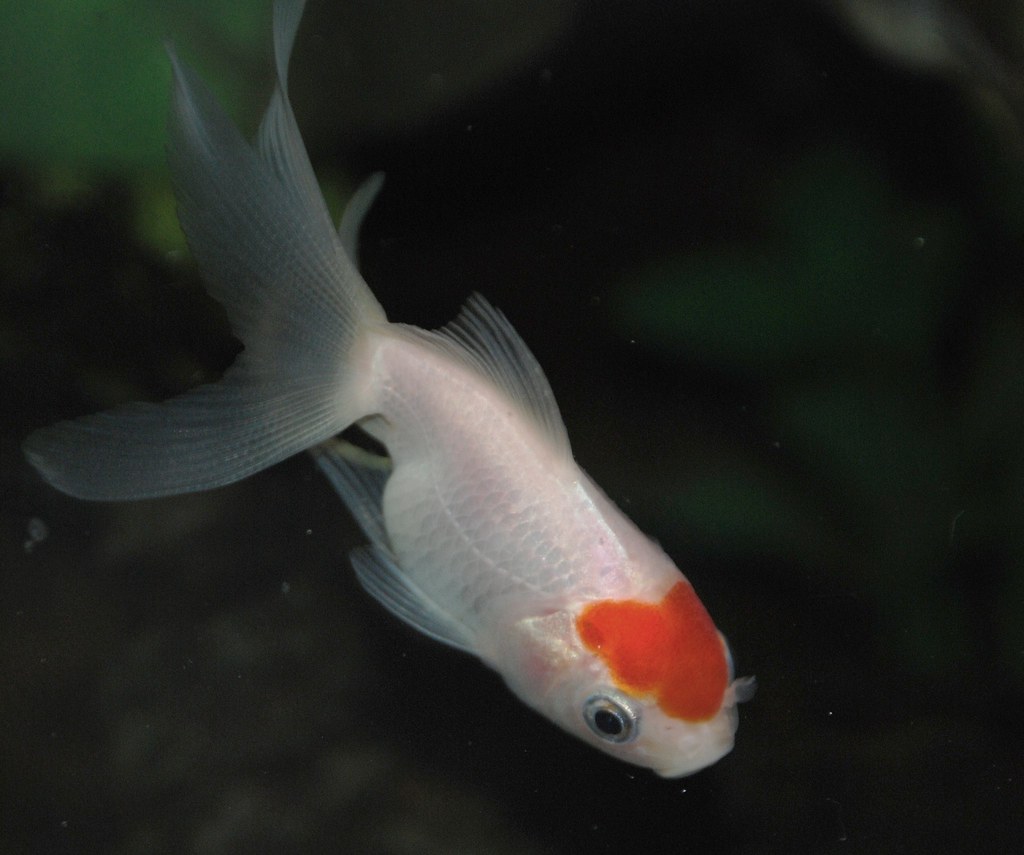 Well! It depends on the cause of why your goldfish turned white or started turning white. Assuming the root cause was due to one or a combination of inappropriate diet, lighting, water conditions, environmental issues, etc., and correcting all the reasons and make it conducive for your goldfish, then it can regain its color slowly.

However, if the issues are genetics or old age or due to the cause of certain illnesses, you accept them as they are, as your fish being pale or black-brown is a permanent fact.

Your fish can still live a long and healthy life while being pale.

In some parts of Asia, white goldfish are popular. In particular, if the fish retains its golden color on their head with a wen (a thick cyst), is high demand amongst the hobbyists in Asia.

Why Is My Goldfish Turning White?-warp up:

After reading the article, now you know the probable causes why is your goldfish turning white?

Goldfish turning white is not always the end of their life. As you have seen, for most common reasons are aging and genetic are part of their evolutionary process.

The other causes, such as the over-feeding or improper diet, substandard water quality, your aquarium set up, lightings you can rectify to save your goldfish from turning white and dying.

When it comes to illness, and diseases consult the professional promptly and remedy the ailment.

If you have goldfish, share with us your experience down below. If you have any queries related to goldfish you may comment below or alternatively, contact us here.