Skip to content
Why do female guppies attack male Guppy?
On the internet, there are hundreds of thousands of articles proclaiming the peaceful nature of Guppies. I have written myself a few articles on Guppies professing the same thing; Guppies are calm, friendly species, easy to care for, are a great addition to a peaceful community tank, etc. and yet many Guppy owners witness Guppies aggressivities; furthermore, it baffles the Guppy owners when they see a female guppy being aggressive to the male guppies, other female guppies and some times to all the other members in the habitat.
Male Guppies chasing females is a common scenario for all the tank owners, but to witness a female Guppy chasing a male Guppy or attacking a male Guppy and other females holds them in shock; some aquarists even think to the extent of flushing down the aggressive female to protect the other peaceful specimens and bring back the tranquility of the habitat.
This article will address different scenarios and possible causes; why do female guppies attack male Guppy and the female guppies’ aggressivity.

Why my female Guppy attacking my male Guppy?

There are different reasons why do female guppies attack male Guppy; sometimes, the aggression is temporary, whereas the other time, the female Guppy continues to be aggressive till it kills the male Guppy. Here, we will discuss the reasons based on studies conducted by the researchers and, at the same time, hobbyists’ experiences.

Why do female guppies attack male Guppy can be a part of a defense mechanism. Guppies are prolific; however, like most species, female guppies mate with the most attractive and strong males to produce high-quality offsprings. A rejected male will keep attempting to mate with the female of his choice.

Female Guppy spends a hell of a lot of time and energy to avoid harassing males and gives up on foraging and eating. Because guppies’ mating is not seasonal, female guppies must work against unwanted attention constantly. The loss of foraging and feeding time can irritate and exhaust the female Guppy; the continuous irritation and exhaustion can stress the female Guppy and resorts to aggression.

A weaker female Guppy might die during the labor or just after giving birth; however, some fighter female guppies start to chase and attack the male guppies to protect herself and the offsprings.

Some aquarists report that this constant badgering from the male guppies leads to giving birth to underdeveloped and still-born babies. This premature deliverance suggests highly stressful conditions in which the pregnant female lives.

Guppy females are territorial; innumerable aquarists are reporting about how their female guppies are territorial. Some are more territorial than the others; once she has chosen her spot, the females nip, chase, and shred the tails of any male who tries to ruin her territory.

Some aquarists believe if the spot chosen is where the supply of food comes from, the aggressive female guards that territory and nip and chase any male approaching the area.

Size of the group and Male-female ratio 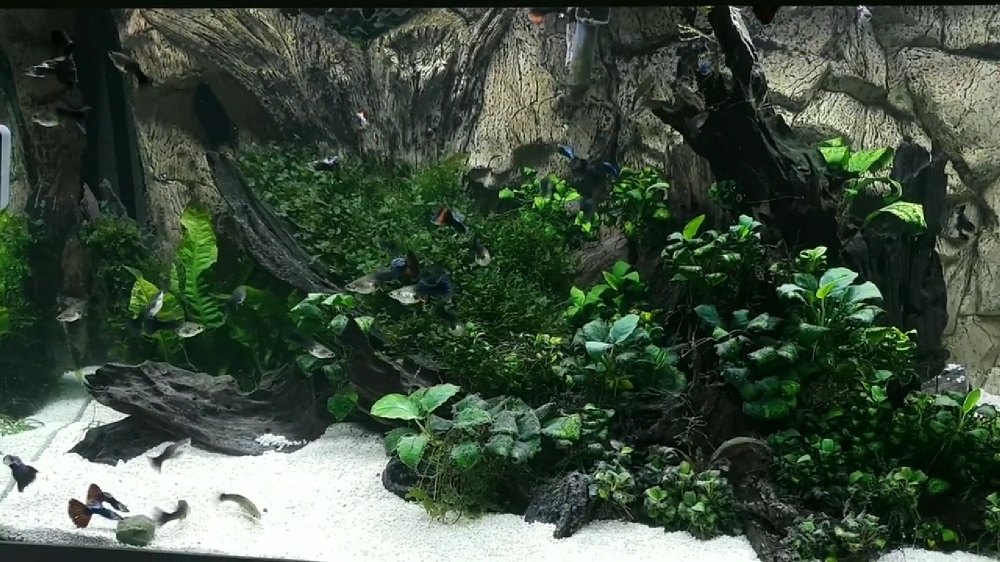 Guppies are social beings, and they love schooling and shoaling; a group of 3 to 4 specimen, perhaps a too-small group, and one guppy might try to exhibit dominance over the others by bullying and fighting the other members.
The general rule for the male-female ratio is 1:3; when this ratio goes is not maintained, the chances are that more than one male guppy is chasing and bugging her; continuous chasing tires and exasperates her, and at one point, she can turns aggressive and attack the males as a defensive mechanism.

Guppies are prolific, and their mating is not seasonal. It is said that a female guppy is almost always pregnant; pregnant Guppy moods are most likely to be on edge, and the wrong water parameters might elevate the edginess.

Imbalanced water parameters add to the exasperation and turn the female Guppy aggressive.

A female guppy might exhibit aggression when a male guppy is sick with parasites and harmful bacterias; she will chase and attack him. A pregnant guppy can be doubly aggressive in case an ill guppy goes anywhere near him.
Related readings:
Why do guppies eat their babies? How to prevent it?
How many guppies per gallon?
Can Guppies live with Goldfish in the same tank?

The presence of harassing male guppies causes disorder in the female social networks and results in female to female aggression. Female guppies are hierarchical; establishing the bonding and hierarchy needs time, and the harassing males disrupt this process.

Guppies are social beings; the females generally initiate this social order; female guppies move from one group to another in establishing the social network; however, a harassing male diminishes the time among the female guppies.

The researchers believe the female to female aggression is perhaps the demonstration of misplaced aggression, helplessness, and frustration of unable to do anything about the male Guppy harassment; the females might vent out the frustration on the other females near her.

We all have seen in National Geography or in some viral videos where a monkey, pulling the tail of a tiger playfully and running away, a bird pecking on a buffalo, a penguin kicking another penguin; sometimes even some animals teasing humans, I have experienced this kind of mischievous behavior from crows, dogs, cats, personally.

I’m sure I am not the only one to experience this playfulness because joy is an inherent quality of existence; playfulness goes hand in hand with joy. Likewise, Guppies are no exception; they are perky, funloving species.

Both Bettas and Guppies are popular species in the aquarium hobby, and it is not uncommon to see aquarists keeping them both in the same habitat. Betta fish a semi-aggressive species; however, guppies are agile and bouncy.

An aquarist reports that one of her female Guppy playfully swims beside the female betta teasingly and gets the betta to chase her. The same Guppy would go to the other peaceful female Guppy and imitate the aggressive betta behavior towards the other female Guppy 🙂

We can say it an excellent example of a sense of ill-humor.

Guppies are schooling and shoaling species; schooling behavior is an efficient way to protect oneself from predators; enhanced vigilance of a large group can detect and share approaching predator information.
Researchers believe an individual guppy behavior is largely influenced by where they evolved from. Hence, guppies, Poecilia Reticulata from the high predatory territory, are disciplined and friendly to their neighbors, whereas guppies, Poecilia Reticulata, from the less predatory region.
The one from the minimum predatory territory can be more individualistic and mean to other fellow guppies, including female guppies.

How to stop female guppies from attacking and bullying?

Guppies are Poecilidae family, which includes over 50 plus types; the one commonly seen in the aquarium hobby is Poecilia Reticulata, also known as million fish, rainbowfish, etc., Poecilidae Wingei, known as Endler’s livebearers, and Micropoecilia Picta.

When you see an unreasonable female guppy behavior, the first order of business is to identify the species and isolate the specimen.

An aquarist has reported that one aggressive female had killed two male guppies and one female guppy before he could spot the culprit; another aquarist reports that a pregnant guppy had killed all the inhabitants in the tank, including zebra danios.

There are many ways you can stop female guppy from bullying and aggressing other members in the habitat; it is imminent you do all the necessary steps to prevent the aggression if you do not want to end up losing all the other specimens in the habitat.

The first rule of aquarium hobby is to check the water parameters regularly and correct them to the requirement of the inhabitants. Likewise, when you witness any disorderliness in your aquarium, start with checking the water parameters; correct the temperature, pH, hardness, etc., to the desired guidelines.

Performing regular partial water change is part of the routine to keep the aquarium water clean. Unclean water and parasites can be irritating and can unsheath aggression from some specimens, especially a pregnant guppy.

Therefore, keeping a check on water parameters such as temperature, pH, calcium carbonates, bi-carbonates, etc. Also, ensure Ammonia and Nitrites levels are 0 and the Nitrates is not over 20 ppm. You can also perform twice a 50% water change.

Do Guppies need a filter?

Can Guppies live in Cold Water?

Do Guppies need a Bubbler?

If your female guppy is particularly aggressive to one specimen, check for his health; check whether he is ill with parasites or any other disease. If so, move him to a separate bowl or a tank and address the issue before moving him back to the main tank.

It is no secret guppies are social beings and love to school and shoal; in a small group of three to four guppies, there can be more room for power play; however, in a large group, the aggressive trait is well distributed and under check. That is why you will notice that most of the experienced aquarists keep a large school of guppies to avoid any dominant behavior.

When you notice a pregnant guppy, the best is to move her to a separate breeder’s tank when she can stay peacefully and forage till she delivers.

If you don’t have the provision for a separate tank, you can use a large breeder’s box to separate the pregnant guppy; avoid using a small box as it can stress her and might during the labor or after giving birth.

Ensure to have more covers such as live plants, rocks, caves, driftwoods, tubes, and other decors in the habitat. Territorial dictating females can have their corner demarcated by a bush or driftwood or any aquarium decor.

Live aquarium plants and decors help to break the lines of the sight and provides plenty of hiding places for the shy and the weaker specimens.

Scarcity of food can make guppies aggressive. So, feed them enough and distribute them evenly across the tank; however, overfeeding can cause ailments to your guppies, and the leftovers can escalate nitrifying elements in the water more than what your filter can handle.

Always remember the three minutes rule in feeding your aquarium fish, meaning, feed as much as the fish can eat under three minutes; remove any leftover from the tank before it starts to decompose.

After making all the precautions, if your female guppy continues to attack your male guppies or any other member in the tank, isolate her; either move her permanently from the tank to a separate tank or isolate her in a breeder’s net or box for a few days.

After a few days, you can move her back to the group keeping a close eye for any aggressive move; if you notice any hint of aggression, you will have to move her out for a prolonged period or permanently.

Move injured guppy into a separate tank or breeder’s box:

It is essential to take care of the injured guppy by moving him or her to a separate tank until the guppy recovers from the wounds; also, damaged fins can turn to fin rot disease if not taken care of; can contaminate the rest of the stocks in the tank.

Bullying and fighting are not exclusive to guppies; it is common in the aquarium hobby with most species. Generally, guppies are friendly and peaceful species; they are a great addition to a peaceful community tank, no one can refute this fact.

However, from time to time, you might come across such aggression if they are not given the proper care; fortunately, there are plenty of corrective measures to stop this aggression, with rare exceptions.

So, still, Guppies remain one of the most sought-after fish species among hobbyists!

We would like to hear from you if you have had any aggressive specimens in your tank; it can help other readers! Thanks!