Skip to content
White Cloud Mountain Minnow is a freshwater fish from China and Vietnam. This species is a member of the Cyprinidae family.
White Cloud Mountain Minnow is one of the most sought after fish in the aquarium hobby. They are hardy and peaceful schooling fish.
Let us continue reading to know more details about this almost extinct species. 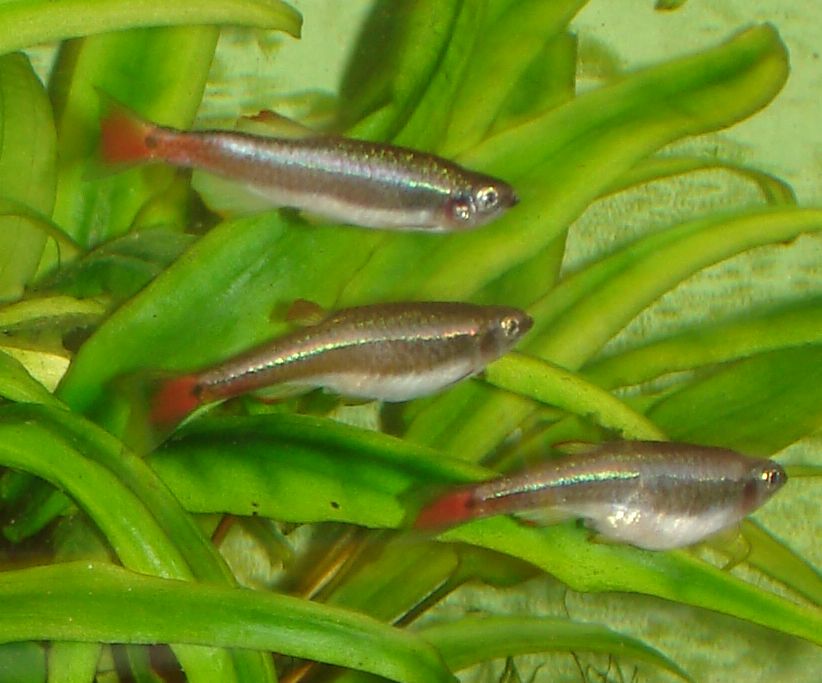 White Cloud Mountain Fish are in the aquarium trade ever since it was discovered in the 1930s by Tan, a boy scout in the city of Guangzhou, also known as Canton. The scientific name Tanichthys means Tan’s Fish and albonubes mean white cloud in Latin.

The White Cloud Mountain Minnow is near to extinct in its native habitat owing to the reason, tourism, and pollution. Beginning with the 1980s, for about 20 years, most people in the aquarium trade believed that the species have extincted.

Then, it appears that the native population has seen the fish on Hainan island, China, and Quảng Ninh province in Vietnam, which is far away from the white cloud mountain. Yet, it is scarce in the wild. Ecologists, including aquarium hobbyists, are trying to re-introduce the species in their natural habitat.

Today, all the White Cloud Mountain Fish we see in the aquarium hobby are farm breeding. The continuous inbreeding in the commercial farms for decades has weakened the species genetically. These genetically weekend species are vulnerable and susceptible to diseases.

White Cloud Minnow is a freshwater nano-fish. They grow to approximately 1.5 inches (4 cms) in length.

The original white color minnows are with silver-green scales with bright red caudal and dorsal fins.

White Cloud Minnow has a pointy face with a down-turned mouth, and their dorsal fins start beyond the mid-section in line with ventral fins. Both dorsal and ventral fins are triangular and point towards the tail.

They have a noticeable black spot at the beginning of their tails.

They have a golden color body with white stripes along the lateral sides of their body and display a red color towards the end of their tail and both sides of their heads.

Just like the White Cloud Mountain Minnows, they are hardy and peaceful schooling fish that adds great color to your aquarium tank.

The beginners easy to keep minnows are happier and energetic in a group of 6 or more fish. They dwell in the top half of the tank from the middle to the upper part of the tank.

Golden white cloud mountain minnows are great freshwater community fish. They can do well with species that occupy the bottom half of the tank, such as celestial pearl danios.

For Golden white clouds, care, diet, tank set up, and breeding are the same as white cloud mountain minnows. 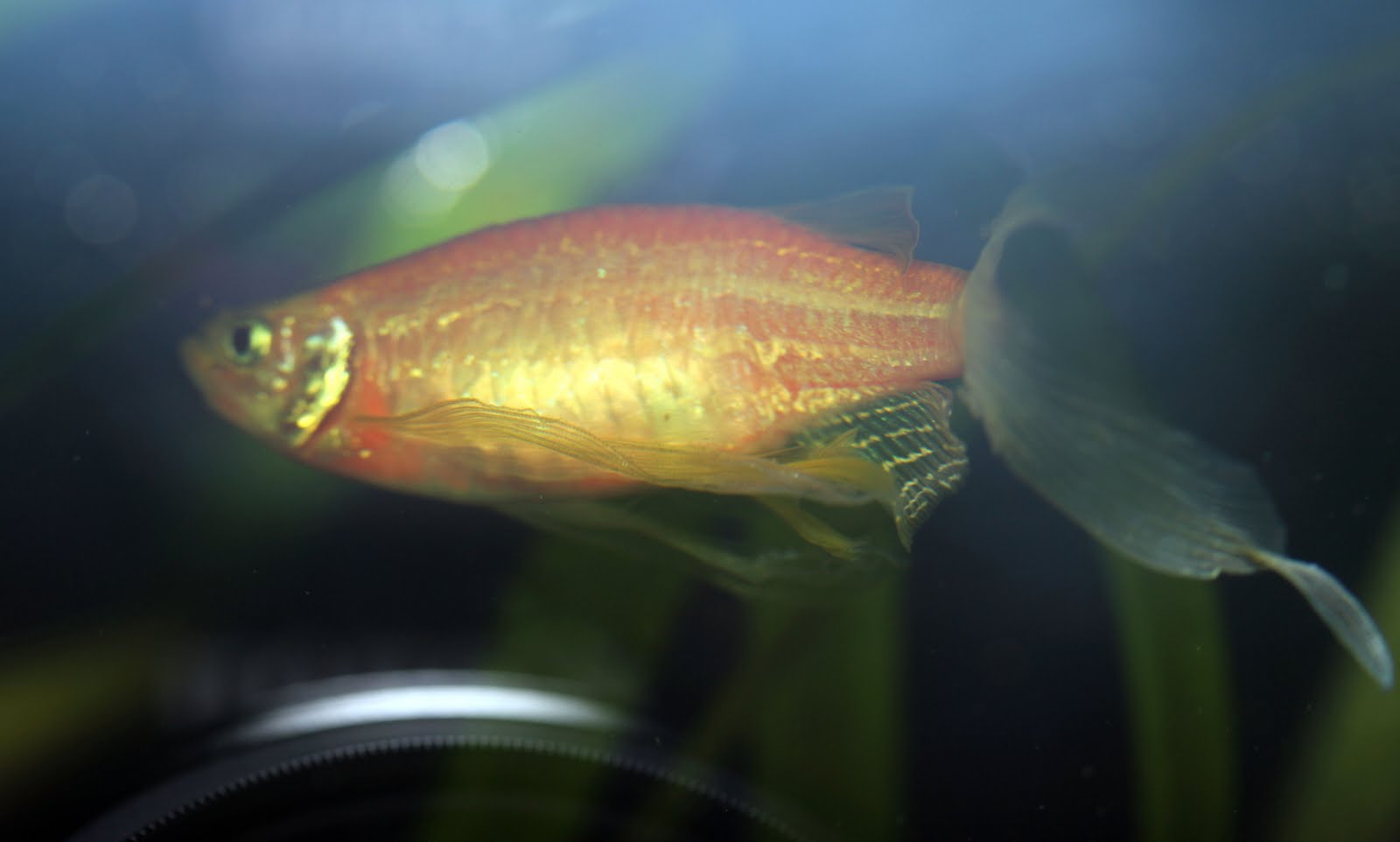 The Meteor Minnows are another variation of the White Cloud Mountain Minnows. They are longfin variety of white cloud mountain minnows.

Today, in the aquarium trade, what you call Meteor minnows are an imitation of this original meteors.

The average life span of White Cloud Minnows ranges from 5 to 8 years, depending on the optimal condition of the water.

The experienced aquarium hobbyists observed that the minnows live longer and healthier in the cooler water temperature. Keeping the minnows in warmer water is significantly reduces their lifespan.

White Cloud Minnow is a member of the carp family in the order of Cypriniformes. They are native to the rivers and streams of the canyons of the white cloud mountains, Guangzhou, China.

Streams in this region are cold, fast-flowing, and covered with aquatic plants. The water pH range is around neutral from 6.5 to 7.5 and with 5 to 19 dH water hardness.

The canyons have a mixture of rocky, gravel, and sand substrate. The minnows take shelter in the areas where there is a mixture of aquatic vegetations such as floating plants, weeds, and bushes. They use this vegetation as breeding nests.

Behavior and the temperament:

White Cloud Minnows are a peaceful shoaling fish. They are at their best when they are in a large group. A single White Cloud Minnow in a community tank will be shy and stressed. A stressed Cloud Minnow will have a less chance to live to their optimal lifespan. Also, it will become fearful and lose its lustrous color.

They are comfortable and energetic, at least in a group of 6 minnows. The larger the numbers, the merrier it is for the canton minnows.

White Cloud Mountain minnows dwell in the top half the tank, particularly in the middle-level. Seldom you will see them at the bottom half of the tank.

Although generally, they are a peaceful community fish during the mating seasons, the males can get aggressive to one another. Striking the right male-female ratio will solve this issue.

White Cloud Minnows do not pick up a fight with fellow tank mates, they make a good tank mate to other schooling fish such as tetras.

Even though they are tolerant of bad quality water, it is advisable to introduce them in a well pre-cycled tank at the right water parameters. 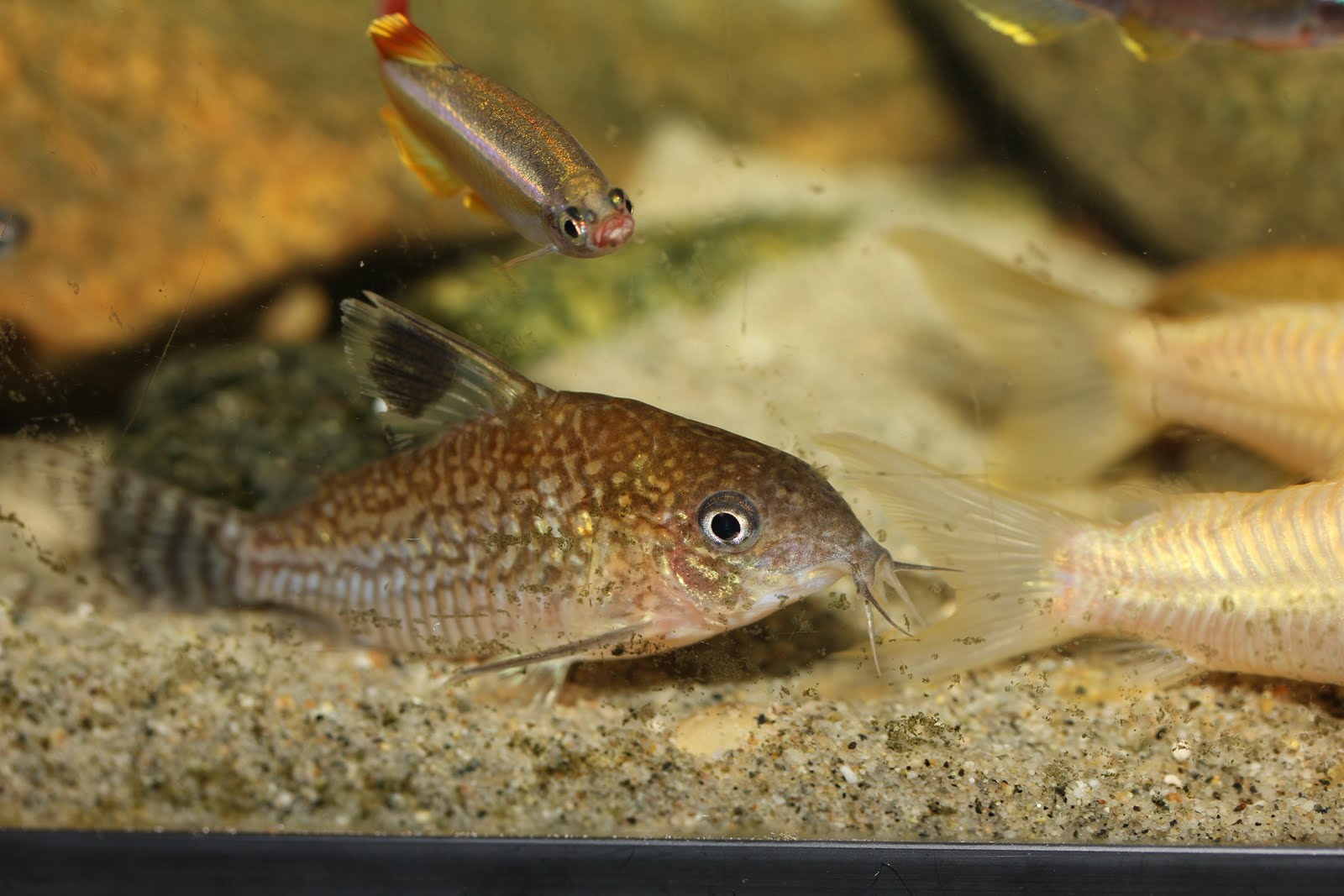 You have several choices when it comes to minnows tank mates. They can also live in a tropical aquarium tank as long as the water temperature does cross 72°F (22°C). Most tropical schooling fish such as Platies, gold bards, rainbow sharks, mollies, swordtails, guppies, etc.

Do not keep white cloud minnows with any large or aggressive fishes, Cichlids, such as jack Dempsey, Oscars, etc.

Also, avoid goldfish, though, in most pet supply stores, they recommend goldfish with white cloud minnows.

Before choosing tank mates for any fish, consider their need for water parameters and the temperaments.

You need a minimum tank size of 10 gallons (40 liters) to keep the white cloud minnows. As they thrive better in a fairly big group, we recommend you to keep a minimum of 6 fish. If you are planning on keeping more than 6 fishes, consider buying a bigger tank. Despite their nano size, they need plenty of space to swim.

Besides, you need space to plant and other decors to recreate their original habitat, gorges of White Cloud Mountain.

White Cloud Mountain Minnows are native to the rivers and streams of the canyons of the white cloud mountains, Guangzhou, China.

Their natural habitat is a mixture of rocks, gravel, sand, and plants such as weeds, mosses, floating plants, etc.

Filtration and other equipment:

A small internal filter can create similar currents to their natural habitat. You need a heater if your ambient temperature dips below 65°F (18°C). You may need some small supplies such as a thermometer to keep watch of the temperature of the tank water, a gravel vacuum for a weekly water change, and a test kit to check the water parameters.

Match the lighting to the need of the plants and the other species in the aquarium tank. My recommendation is a programmable LED light to bring different luminosity of day and night.

Canton Danios, White Cloud Minnows are middle to the top-level occupants. They seldom venture down to the bottom half of the tank. Therefore, they can thrive in most substrates such as rocky, gravel, plant. Just avoid too fine sand substrate for any nano species. 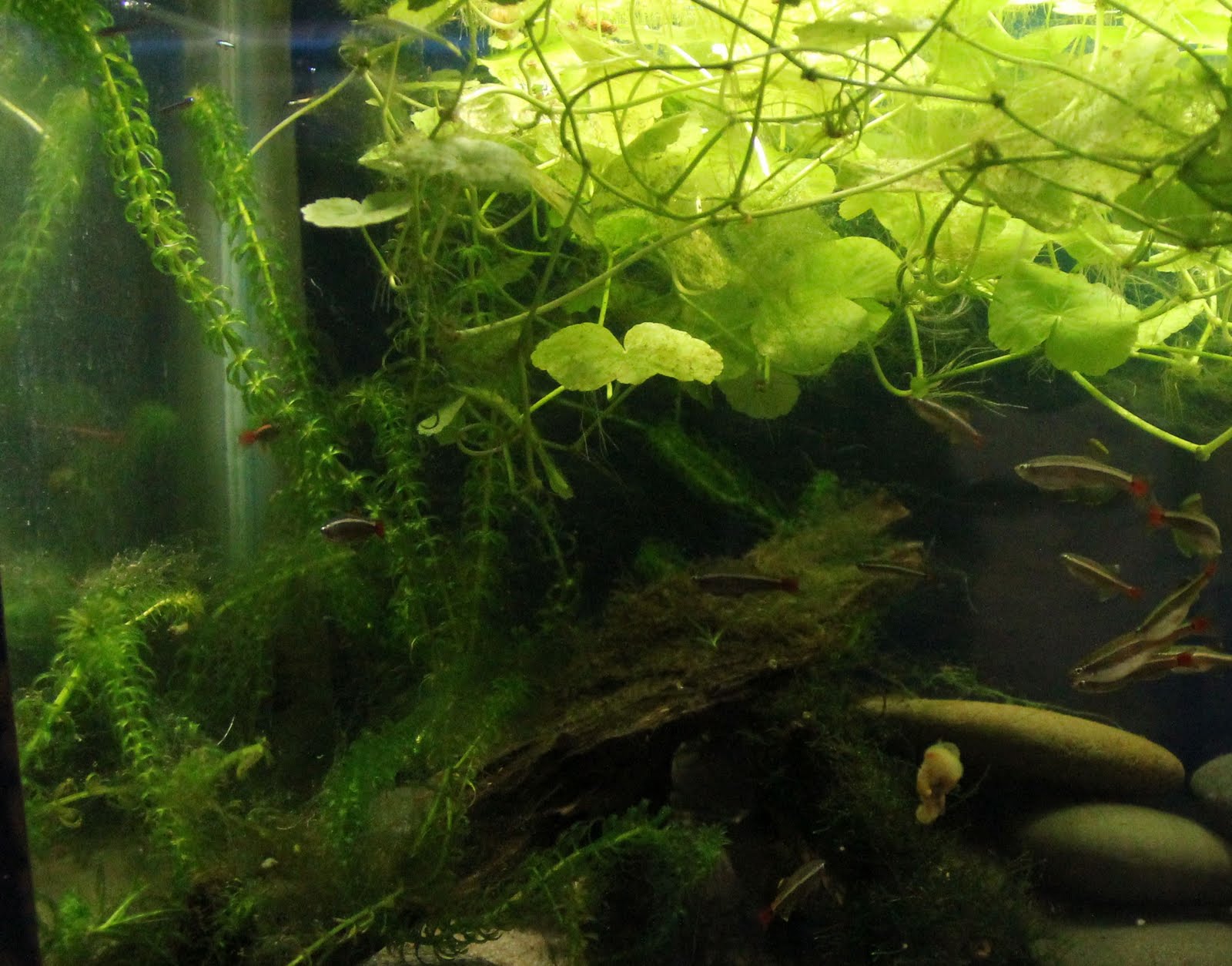 The decors for White Clouds include rocks, driftwoods, and not to forget the plants. You can use both floating plants and rooted plants such as java moss, Duckweed, Dwarf Rotala, etc.

These plants help to keep the water conditions such as pH, dissolved oxygen, water hardness, and even with temperature to some extent.

Moreover, they provide plenty of covers for micro rasboras along with nutrients supplements.

Furthermore, these plants are an ideal place for eggs to secure itself and for fry to hide from predators that include their parents.

Some aquarium hobbyists have reported that they tend to jump out of the tank out of the curiosity. So, we recommend you to keep your tank top closed.

White Cloud Mountain Minnows are omnivores. Hence, they need both animal and plant diets. They are also a micro predator and they feed on zooplankton, water flees, micro worms, algae, etc.

You can also feed them high-quality commercial algae wafers.

When you feed any nano fish, keep a good watch of their eating habits. If you see any unfinished food after an hour or so, reduce the size of the feed.

Remove uneaten food as the decomposing of uneaten vegs can build ammonia, nitrite, and nitrate in the water, which is fatal to all the aqua lives.

White Cloud Mountain Minnows breed all year round. They are a good choice for first-time breeders.

For the species only tank, it is a straight forward method. There is no need to make any special arrangements as white cloud minnows do not combat eating the eggs or the fry.

In a well-balanced male-female sex ratio, they spawn several times in a year. You can feed them with live food such as brine shrimp, bloodworms, daphnia, mosquito larvae, etc. to condition them.

You can also set up a separate breeding tank of 5 to 10 gallons if the minnows are living in a community tank. A school of 6 minnows of 2 males and 4 females is ideal for breeding the minnows.

Prepare the tank with a spawning mop and or with floating plants, such as java moss where the fish can scatter the eggs. The water parameters should be 66 – 70°F (18 – 21°C), a pH range from 6.5 to 7.5, and hardness should be 5 to 19 dGH. Filtration should be gentle, sponge filter is a good choice.

The eggs will hatch anywhere between 4 to 6 days. The moss will house enough infusoria, which is the best first food for the fry. You can also add some infusorian water for the first few days. Once, the fry is free from their yolk sacs you can start to feed them crushed high-quality commercial fish food such as algae wafers, micro worms, etc.

White Cloud Mountain Minnow is an excellent choice for novice aquarium hobbyists. They are peaceful and easy to care for, which get along very well with numerous tropical and sub-tropical fish and invertebrates. They are active and beautiful fish that does not compete for food with other species.

Share with us your experience, if any of you have these China Minnows.