Rainbow Sharks are native to the basins of Mekong, Chao Phraya, Xe Bangfai, and Maeklong and part of the Cyprinidaefamily. The Cyprinidae is the most and the largest vertebrate animal family with about 3000 species, of which only 1270 in existence.

The rivers in these regions have a sandy substrate. Rainbow Sharks live in flooded regions or rivers with a good flow.

Rainbow Sharks are semi-aggressive community aquarium fish. They are beautifully colored fish with dark gray to black body and orange or red fins. They are known for their territorial nature and their colors.

They receive their common name Rainbow Shark because of their warm-water origin and upright dorsal fins.

Rainbow Shark calls for fairly experienced aquarists to house them due to their territorial and semi-aggressive nature.

The inappropriate ambiance and water conditions along with stress results in their premature demise.

For the Rainbow sharks to live to their fullest potential, provide them with the right ambiance and water conditions.

While their fins remain orange-red their body-color varies from dark grey, dark blue to black. The dark body with orange-reddish fins makes their body look longer and slender.

Rainbow sharks have erect dorsals, a flat stomach with flat and spiked nose makes them resemble the marine sharks.

In general, rainbow sharks can grow about 6 inches in length, it is quite likely, that they may not reach their full potential length in aquarium tanks. It will take about a few months for them to come to their full size.

It is difficult to identify their sex when they are young. The sexually developed female has a broad and rounded stomach while the male has a narrow body. The male’s fins colorations are brighter than the female of the species.

The Albino Rainbow Sharks are also known as the Albino Ruby Shark or Albino Red-Finned Shark.

Albino Rainbow Sharks are the result of selective breeding. They have the same fins coloration is orange-reddish just the same as common Rainbow Sharks, while their body is in white with a hint of pink undertone instead of grey or blue or black.

They are commonly available in the aquarium markets. They tend to grow a little smaller than the common rainbow sharks, while their temperaments remain the same as their common relative. 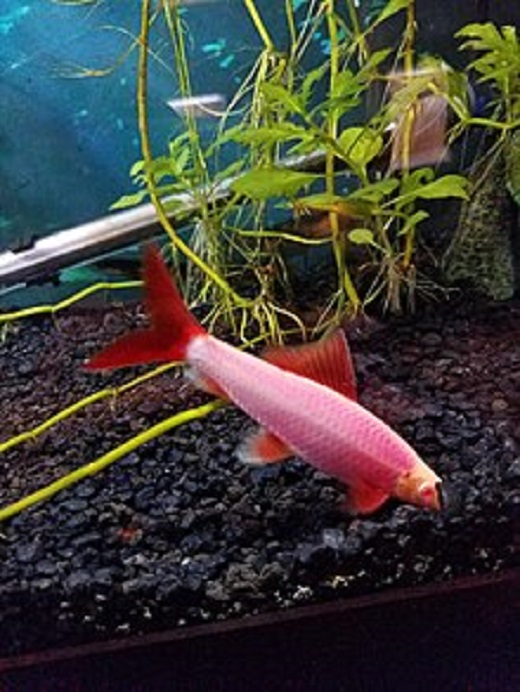 Glofish Rainbow Sharks are of the minnow family, but they are not sharks. They grow up to 4 inches in length.

During the initial selective breeding, there were only 2 colors magenta and orange. Now, you can find Glofish rainbow sharks in additional 2 colors Blue and Green.

All four colors come in fluorescent colors just like jellyfish. Since they glow they can be added to the neon aquarium tank with right plants and decorations.

In their natural habitat, they are sober and mind their own business. They are peaceful with the other rainbow sharks and the relatives.
However, in captivity, they tend to be aggressive with one another.
Don’t be fooled by the shy appearance of juvenile rainbow sharks in the aquarium store. As they grow they will become increasingly assertive with age.

Rainbow sharks are territorial, in the small aquarium tank fightings between the sharks are common traits. Such behaviors include, head and tail butting, biting, etc. A large Rainbow Sharks will continuously chase the smaller one till they die.

This behavior you can minimize by providing ample hiding place with plants and tunnel-like, cave-like decors. This demarcates their territories and reduces unnecessary aggressions.

They are generally peaceful with the species that dwell in the middle to upper levels, they are aggressive with other bottom dwellers including with other rainbow sharks.

While choosing an aquarium tank, you should make sure to have a long one for them to swim a full length.

Rainbow Sharks are tropical fresh-water fish from Southeast Asia and Thailand. They inhabit the rivers and floods of the Mekong, Chao Praya, Xe Bangfai, and Mae Klong river basins.

Rainbow sharks are active swimmers and they live in the water with sandy substrates. They are bottom dwellers and feed on algae and plankton.

They are migratory species, during the flood seasons they migrate to flooded areas, and when it dries up, they move back to the sandy rivers.

The minimum required tank size for Rainbow Sharks is 50 gallons (200 liters). This tank size is ideal for 1 Rainbow Shark. If you are planning on keeping more than 1 fish, then consider setting up a larger than 125 gallons (500 liters) tank.

The aquarium tank length should be a minimum of 48 inches (1.2 meters) as they swim quickly and terrorize other fishes in the tank in a smaller tank than this length.

While building a habitat for Red Fin Shark, you should aim to recreate the conditions of their natural habitat as best as you can, while keeping in mind their behavior and temperament.

The best way to maintain a stable temperature is to get a high-quality heater that maintains the set temperature effectively.

Maintaining a stable water pH level ranging between 6 to 8 pH and water hardness between 5 to 12 dGH is essential to keep Red Fin Shark stress under control.

It is a freshwater tropical fish, which lives in rivers with a sandy substrate. Therefore, a sandy substrate is an ideal choice for Rainbow Sharks. You may use a gravel substrate as long as the gravels are well rounded. Sharp edges might scratch and injure them.

They hail from high current rivers and flooded regions in the wild. Thus, you should maintain constant water flow in the aquarium tank where the Red Fin Shark are housed. You can increase the water flow by placing some small jets or some air-stones around the aquarium tank.

If you have a large tank over 125 gallons (500 liters), then you could use some controllable wavemakers such as Jebao, Uniclife, etc.

You can also increase the water flow in the tank by removing all the aquascapes that reduce the water flow. However, if you have a community fish tank or more than 1 shark, you cannot adapt to this solution.

While aquascaping for Rainbow Shark Minnows, you should consider the number of minnows you are planning to have in your tank. If you are content with having just one Rainbow Minnow, then it is simple and straightforward decors.
However, if you are planning to have more than one, then you need to have plenty of cover in its aquarium tank. Different size boulders & pebbles, live plants, driftwoods, caves, tubes, etc. will help to demarcate their territories. This helps to reduce the conflicts between one another.
Furthermore, it helps them to have a peaceful corner for themselves to feel safe and secure. When they feel safe and secure they are pleasant and lively.
They feed on algae, plankton, and dead plants. You can consider having some hardy plants like java moss, java fern, anubias, hornworts, etc.
They make good aquarium plants for single species as well as community tanks.

There are no specific requirements when it comes to lighting Rainbow Sharks Tank. The illumination in the tank is determined by the other species and the plant life in the tank. As a thumb rule, you can follow the natural day/night cycle.
LED aquarium lights are programmable and are also an inexpensive option. 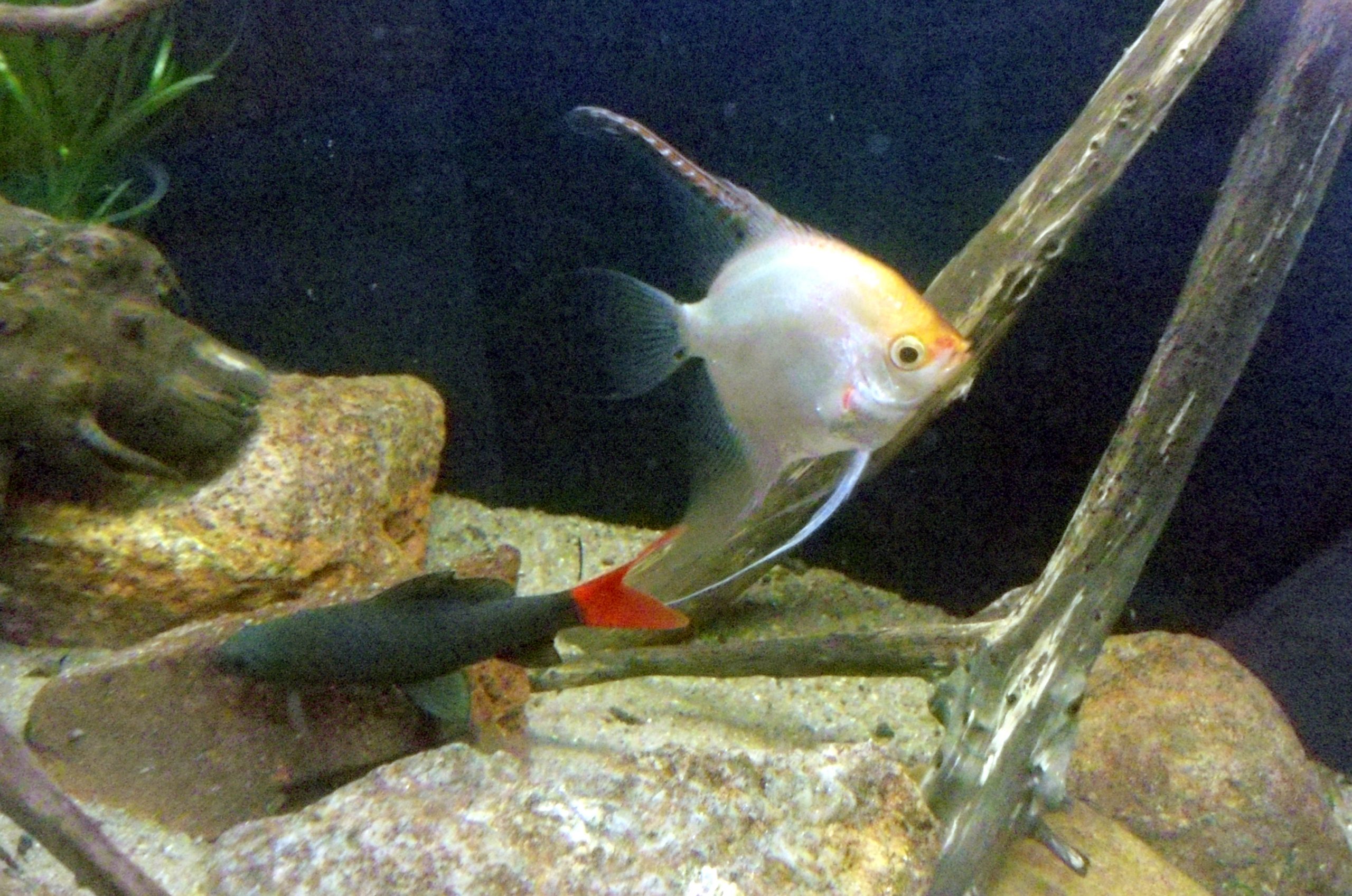 Rainbow Sharks are majestic looking fish with an attitude with their orange-red fins against the slender dark body.

Here we must reiterate the fact that Rainbow Sharks do not belong in a peaceful community aquarium tank.

Don’t get carried away by the shy appearance of juvenile rainbow sharks in the aquarium store. As they grow they will become territorial and aggressive.

The adult Rainbow Sharks are territorial and might terrorize most peaceful species. In aquarium tanks, they will claim a cave or rock or plant bush as their own. Any fish that stumbles upon the claimed territory will aggress them, particularly one of their own or their relatives or any fish that resemble them.

Rainbow Sharks dwell at the bottom of the tank, hence, avoid other aggressive and semi-aggressive bottom dwellers Catfish or Cichlids such as Jack Dempsey. You should also avoid red-tailed black sharks, Bala Sharks, etc.

You should also avoid keeping them with any fish with long flowing tails as they tend to peck on the fins.

Keeping only 2 rainbow sharks will make them fight constantly until one of them die. When there is more than 2, each one mind their territory once claimed.

If the rainbow shark is the only aggressive type in the tank, the best is to add as a last. This will prevent them from claiming the whole tank as their territory, and exhibit aggression towards other species.

Although they are omnivores, they mainly feed on algae and plant matter. They also feed on insect larvae, zooplankton, etc.

You can feed them with flakes and pellets that sink to the bottom. You can also feed them with vegetables like cucumber, zucchini, spinach, peas, etc.

Blanching the vegetables before feeding will keep the deterioration of food and results in excess bacterial concentration in a closed atmosphere which leads to depletion of oxygen. Consequently, the fish may drown or suffocate to death.

You can as well feed them with frozen/live bloodworms and brine shrimps.

For them to grow large and vibrant, you need to feed them with a balanced diet, varying from vegetables to live food. Lack of variety of diet may impede their growth and coloration.

You can feed them once or twice a day depending on their reaction to the feed. As a thumb rule, they should finish the food in one go within 5 minutes. If not, divide them into 2 or 3 portions to feed them at different times.

Leftover food in the tank for a longer period will result in decaying of food, which leads to over ammonia and nitrate accumulation of more than what the biomass in your filtration system can handle.

Let us begin with a note stating the chances of breeding rainbow shark minnows and producing the offspring are sparse.

Generally, they are sexually mature when they reach about 4 inches in length. They typically reproduce through egg-laying. The females lay the eggs and the males fertilize it after.

In the wild, they breed during October, November months. Typically, about a week after the eggs will hatch.

As we have stated, this happens in the wild. However, to breed rainbow sharks in your aquarium is a different story.

Breeding them in an aquarium setting is next to impossible. In the aquarium trade, Southeast Asian Commercial farms breed them in large quantities.

After reading this article, you know that you can add them to your existing community just because you are caught by the stately look of the Rainbow Shark Minnows.

If you are planning on keeping just one rainbow shark, in which case the work is simple and straightforward. Just get the right size tank and prepare the tank with the sandy substrate, plants, and decors. Bring the tank water to the required parameters for rainbow sharks, voila! It is ready for your shark with an attitude.

Suppose you wish to add to your existing community tank, just make sure it has all the necessary ambiance and the right tank mates.

If you are a newbie, then we suggest you gain some experience in keeping other freshwater fish such as common goldfish, ember tetra, platies, bettas, etc.

All said and done, if you are looking for a fish with an attitude and color to your aquarium, Rainbow Sharks may be the one for you.