Is a 10-Gallon Fish Tank Too Small for Goldfish?

To answer this question, firstly, you would want to know how big a goldfish gets? Don’t get fooled by the size of the goldfish at the pet store; given the right space and environment, common type goldfish grows up to 10 inches (25cms), and a fancy goldfish type grows up to 8 inches (20 cms); some even grow up to 12 inches (30 cms) and larger. As per Guinness Book of World Record, the largest goldfish measures 18.7 inches (47.4 cms) and belongs to Joris Gijsbers of the Netherlands.

A 10-gallon tank may seem large enough for the young goldies; however, goldfish is something that keeps growing throughout its life-time. With the rule, 1 inch = 1 gallon (2.5 cms = 4 liters), starting with a 10-gallon (40 liters) tank for 3 to 4 specimens, is not at all a bad idea; this should suffice for the first couple of years.

Do Goldfish Need a Large Tank?

An average goldfish usually grows up to 6-12 inches. Hence, as they keep growing, they seek more space, more food, and a peaceful tank set-up for their living. Goldfish are messy; produce a huge bio-load as they grow, hence be prepared for a powerful filtration system with a large surface for bio-mass.

How Many Goldfish in a 10-Gallon Tank?

How many goldfish in a 10-gallon tank? As per the thumb rule here, 1 gallon of water per inch of fish is needed. Goldfishes can grow large up to 6-8 inches. Some of them even extend up to 12-inches long.

Nevertheless, the small and baby goldfishes come with 1-inch length. So, in such cases, a 10-gallon tank will be sufficient for a school of 2-4 cute little goldies.

These are the numbers for a regular aquarium tank with a typical filter with a 25% weekly water change; however, all these rules have not considered the factors of more frequent water change, carefully regulated feedings, lots of live aquarium plants, and multiple filtrations or strong filtration systems.

Hence, the need for the size of the tank varies from situation to situation depending on one or more combinations of the above factors.

Do goldfish grow to the size of their tank?

Is it a myth that goldfish are ordained to grow to the size of their tank?

Goldfish is one of the species that keep growing throughout their life; however, it keeps regulating their growth by producing Somatostatin, growth-inhibiting hormones in their living environment. That is the reason why when you do a more frequent water change, goldfish grows faster.

Indeed, most of the goldfish that have lived over 30 years are 4 to 6 inches (10 to 15 cms) long. They grow to the size of their environment; their habitat literally stunts them. That doesn’t mean they are unhealthy; they lived to the end of the maximum lifespan clearly states that they are healthy.

When it comes to a variety of goldfish, there are numerous. Here are some of the most types of goldfish you would want to be acquainted with before knowing how many goldfish in a 10-gallon tank can live.

This type of goldies is the most common one. As the name suggests, they are raised to feed other larger fish in the aquarium trade, such as Angelfish, Clown loach, Bala Shark, Oscar, Silver Dollar, Jack Dempsey Cichlids, etc. They usually don’t get much attention like other types of goldfish; they accept and thrive in a wide range of water temperatures and dwell well in a tropical tank set-up, which makes them a great buddy to have in your 10-gallon tank.

Comet goldfishes are slightly shorter and come with a leaner body. They are very common and looks distinctive with their sharply forked long tail. However, they require more room to prevent injuries to their tail. So, if you are thinking of keeping, you wouldn’t want to add any more than 1-2 Comet goldfishes in your aquarium unless you want to stunt their growth.

Shubunkins are quite interesting and relatively smaller, making them great to add in a 10-gallon tank. Besides, do you know, Shubunkins are so hardy that they can thrive well even in ponds?

As the name suggests, Ryukins are from Ryukin Island, Japan. They have a huge hump with a narrow face and point nose, with large flowy fins. They are hardy, make an excellent outdoor pond fish, and be a large tank member.

Tamasaba, or the rare Japanese goldfish, has a unique look with its red and white appearance. Their tail usually resembles a mackerel’s tail, making them excellent companions to add to your tank.

Fantail goldfish is a fancy breed with an egg-shaped body, an extended quadruple caudal fin, a high dorsal fin, and a distinctive tail structure. As per their body structure, they seem to resemble Ryukins, but they do not possess any shoulder hump. Besides, these fantails are very easy to care for, which makes them an excellent choice for beginners.

Do you want to get a fancy goldie with an extra-long double tail to enhance the beauty of your tank? Well, then Veiltails would be an interesting and impressive option to opt for. They come with a round and compact body with 4-inches of long-tail and dorsal fin.

Butterfly Tail Goldfish come with a hunched Ryukin-styled body with a long and widespread butterfly-shaped double tail. Well, adding one of these fishes to a 10-gallon aquarium will be adequate.

Different Types of Goldfish for Aquariums and Ponds

How long can a goldfish live without food

Why does a goldfish turn black?

Why does a goldfish turn white and die?

What Shall be the Tank Size for 2 Goldfish?

The tank size for 2 goldfish depends on the types of goldfish you would want to house.

As already said, growing goldfish usually require a minimum of 20 gallons of aquarium tank for them to grow to their optimal size. So, a 20-gallon aquarium is quite adequate for housing two goldfish.

However, goldfish require a larger tank set up as they grow as big as 6-12 inches (15 to 30cms) and some even larger. So, you need to opt for a sizeable aquarium for 2 goldfish while ensuring that you are offering them top-notch care.

Most experienced aquarists who house goldfish have a 55 gallon (200 + liters)plus tank to ensure the right environment for their goldfish’s growth. Not everyone could have a large tank due to budget and space constraints; no worries, as we have already seen goldfish shape themselves according to their habitat. But ensure the care they need to live healthily and joyfully!

What is the Age of Your Goldfish?

Usually, goldfish can live 30 + years; hence, knowing the age of your goldfish, i.e., whether they are adults or juveniles, can help you decide on the size of the tank or if they can be bred during the spawning season, etc.

Analyzing their striking physical features, you can quickly determine if they are juvenile or full-grown adults. So, here is how you can evaluate how old your goldfish is.

Change in the Color of Goldfish

You can easily determine their age by observing their body color. Most of the juvenile goldfish breeds have a brown tinge on their body. But they tend to change into bright golden colors when they mature into adults. The color change occurs around one year of their age as the goldfish grow up to 5-inches by length.

Look at the Size of Your Goldie

Determining the size of your goldfish can also be very helpful for you to conclude on its age. Usually, the mature common goldfish and comet goldfish reach up to a length of about 5-inches within 2 years in an optimal environment. On the other hand, the fancy goldfishes extend up to a maximum of 5-inches within 30 months. Albeit the maturity of age varies in a myriad of goldfish, they become adults within 10-36 months of their age.

Focus on Their Physical Appearance

Having a look at the tail fin or caudal fin of your goldfish can help you determine its age. Tail fins of young goldfish are round in shape, whereas the adults have a sharp and forked tail structure. Their tail fins keep growing as the goldfish mature.

It’s best to know how many goldfish in a 10-gallon tank or 20-gallon tank, etc., to reduce the risk of going off the entail water parameters. So, knowing the calculation method for a goldfish tank can be beneficial. Here is a comprehensive guide for you.

24 square inches for each 1 square inch of the fish body, excluding tails or 60 square cms for every 1 sq. cm.

This thumb rule is made assuming the existence of proper filtration, aeration/bubbler, and live aquarium plants. However, the longer the fish, the larger the body; going by the fish’s length alone will not give you the appropriate tank requirement.

For example, a fish 6inch (15 cms) long requires far more space, food, oxygen than three 2 inches (5 cms) fish or six 1 inch (2.5 cms) fish. Thus, the above thumb is general guidance for calculating the tank requirement to house your goldies; however, it is prudent to be generous while calculating the habitat for your goldies.

Do Goldfish Get Lonely?

There is no way we can know whether goldfish get lonely or not; however, goldfish are not social animals like humans or schooling fish like Neon Tetra, Ember Tetra, Black Skirt Tetra, Harlequin Rasboras, Cherry Barbs, White Cloud Mountain Minnows, Clown Loaches, etc.

So, goldfishes are one of those fish species that enjoy their solitude with much fun.

Other Fish Species For Your 10-Gallon Tank 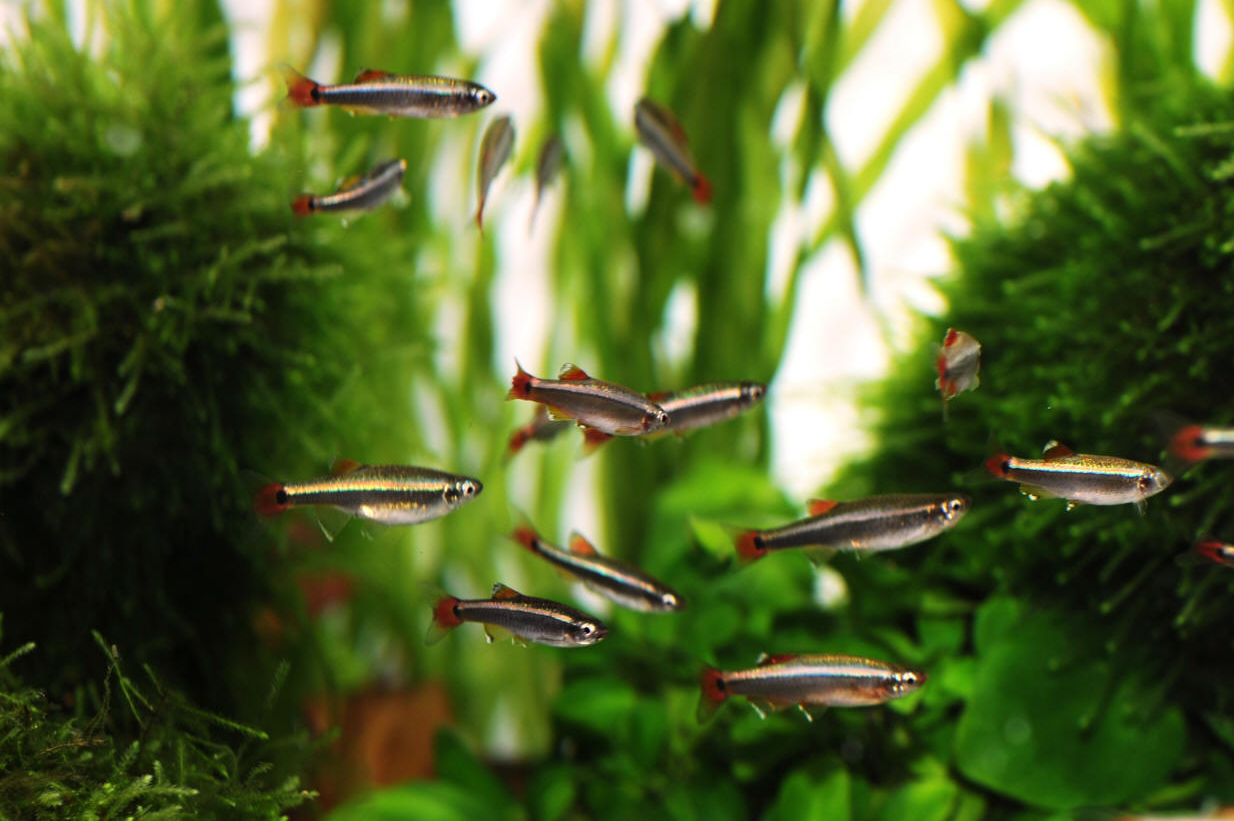 How Many Goldfish in a 10-gallon tank – Final Thoughts

However, for certain goldfishes like Comets and Shubunkins, you would require a minimum tank size of 50 and 75 gallons, respectively.

Anyways, do not forget a goldfish shapes itself to its environment! Make certain to provide required water parameters with a good dissolved oxygen level; your goldfish will live long and healthy!