Skip to content
Can Guppies live with Goldfish? Well! Guppies and Goldfish are the two most admired species in the freshwater aquarium world. Every once in a while, we all want to have all the best things together; likewise, most aquarists want both Guppies and Goldfish to share the same habitat.
The answer to the question, Can Guppies live with Goldfish, goes both ways; some aquarists would give you all the valid and logical reasons why you can’t house them in the same tank, whereas others would give you all the strategies and approaches how you can house both Guppies and Goldfish in the same habitat successfully!
In this article, we will see in detail the side arguments. However, before diving into why and why not, you can keep Guppies and Goldfish in the same tank; let us a short introduction to both the species: the origin and their needs and temperaments briefly. 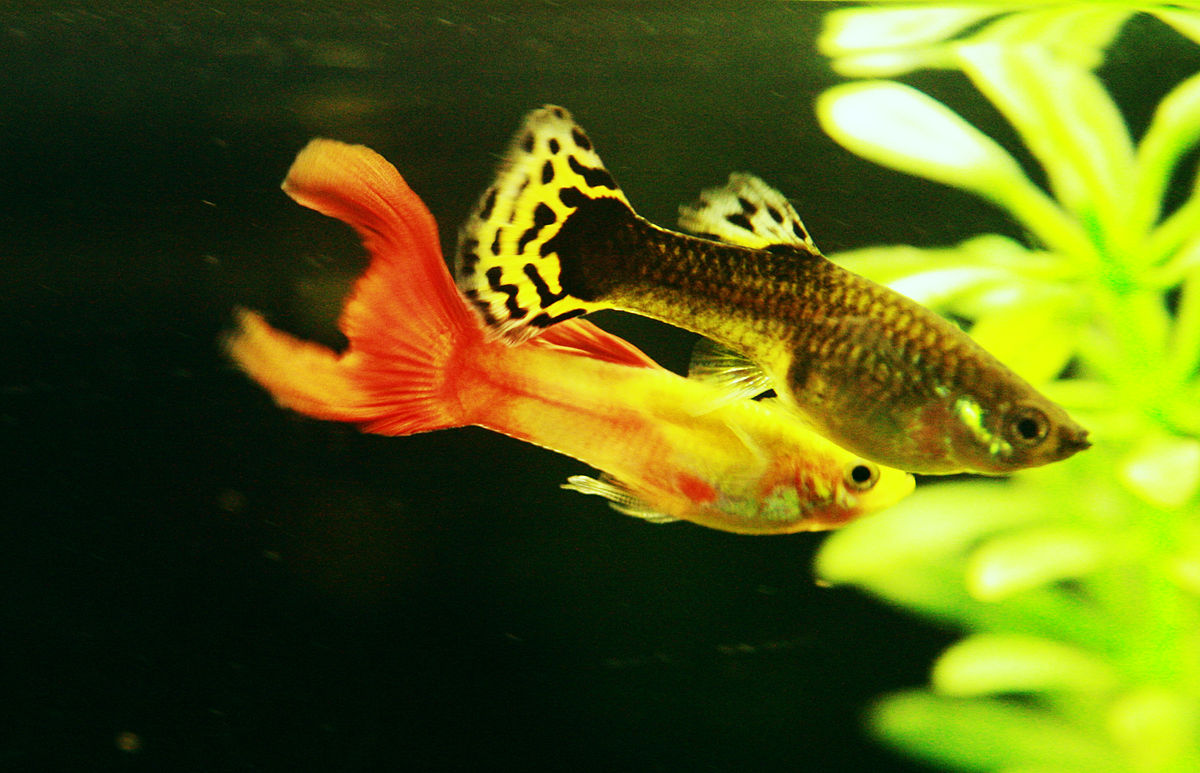 Guppy is a small tropical freshwater species in the family of Poeciliidae in the order of the Cyprinodontiformes genus Poecilia. Like most of the American members of the family, they are livebearers. They are native to Trinidad, Tobago, Brazil, Jamaica, Guyana, Barbados, Venezuela, and other Northeast South American countries.

Guppies exhibit sexual dimorphism; wild female guppies are grey in body color, and the males have splashes of spots and stripes of different color ranges. Today, what you see in the aquarium trade, in all brilliant colors, patterns, flowing fins, and shapes, result from selective breeding.

They feed on algae, diatoms (brown algae), insect larvae, mineral particles, and invertebrates. Most aquarists in the tropical region keep Guppies in their outdoor ponds to keep in check the mosquitoes.

Guppies are shoaling fish; they exhibit less aggressivity and share the food in a group than a solo Guppy. They are active and fast swimmers.

Can Guppies Live in Cold Water? The Ideal Water Temperature for Guppies!

Can Guppies Live with Angelfish? 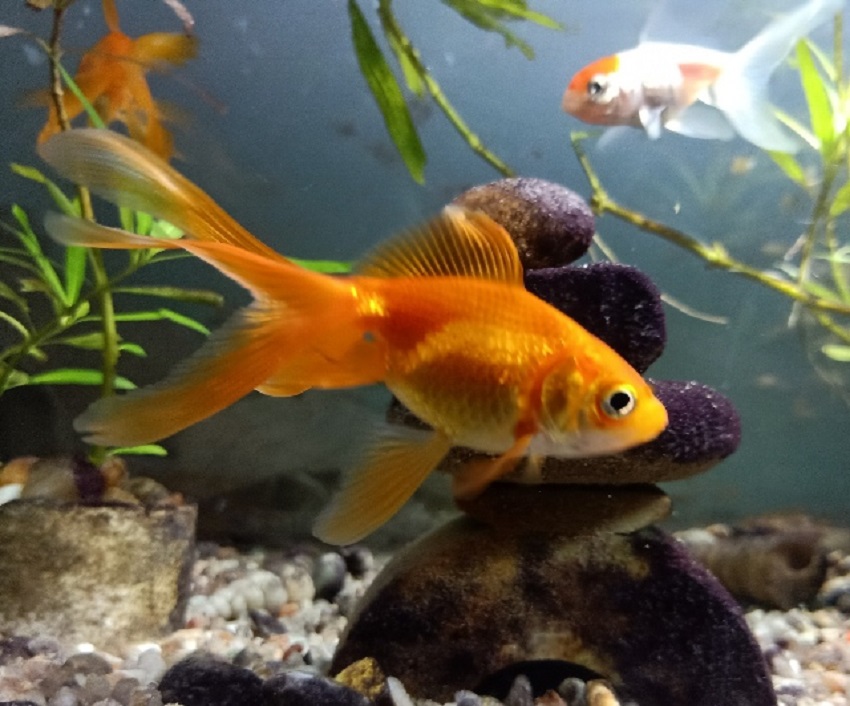 Goldfish is a freshwater species native to East Asia, from the family of Cyprinidae of the order of Cypriniformes. It is a relatively small member of the carp family, including Prussian Carp and Crucian Carp.

In the wild, they are dull grey or silver grey. Today, there are over 200 types of Goldfish in the aquarium trade, all of which result from centuries of selective breeding and cross-breeding over and again; some varieties of Goldfish you can barely recognize as they have nothing of their ancestors. Some types are delicate and fragile can live only in an aquarium with controlled parameters, while the others are hardier and invasive than their ancestors.

Goldfish, in the wild, are all-pervasive; you can find them in rivers, streams, lakes, ponds, reservoirs, ditches, and any slow-moving waterways. They are hardy and thrive in slightly murky water; they can adapt to varied environments; temperate to tropical climate. The ideal temperature is 68 – 75°F (20 – 25°C), pH range 6.8-7.6 hardness up to 12 dGH.

Goldfish size can vary from anywhere between 1 inch (2.5cms) to as large as 14 inches (35.5 cms), depending on the Goldfish types and the habitat size. Goldfish’s average growth in an indoor aquarium range from 2 inches to 6 inches (15 cms).

Goldfish are omnivores; in the wild, they feed on crustaceans such as shrimps, crabs, barnacles, etc., insects, algae, protozoa, and other plant matters. They are opportunistic feeders, do not stop eating on their own accord. They eat anything that fits in their mouth.

How long can Goldfish live without food in your tank or pond?

How many Goldfish in a 10 Gallon Tank?

Guppies are known to forage constantly on algae. They are one of the few species that can eat diatoms or brown algae in your aquarium.

They feed on Biofilm, a thin film on the aquarium’s surface, a byproduct of carbohydrates and lipids from organic waste structures where they get the maximum oxygen. In the beginning, it may seem harmless; with time could become a reason for oxygen depletion in the tank; they consume the oxygen; otherwise, it would diffuse in the aquarium water.

I am sure everyone agrees that Guppies are dazzlers; it’s the foremost reason for their popularity among aquarium hobbyists. Goldfish are no less when it comes to their looks; they come in all shapes, fins, tails, and colors to choose from.

When you have both these colorful, radiant dazzlers in the same tank, it will enchant anyone. A schooling fast-moving small species with slow-moving big Goldfish; both are graceful in their own accord and can keep you mesmerized in their classic beauty.

Guppies keep a check on mosquito reproduction by devouring on mosquito larvae; in tropics, any water pool is a ground for mosquitoes to breed, and a fish tank is no exception to this. Mosquitoes lay their eggs on the edge of the water bodies or any moist location; Guppies are revered for controlling mosquitoes for centuries.

Both Guppies and Goldfish are peaceful by nature. Though a lone male Guppy tends to be aggressive, they are friendly and joyful species in a group; likewise, Goldfish are amicable and graceful.

Why can’t Guppies live with Goldfish?

Can Guppies live with Goldfish? Some aquarists argue why it is not advisable to keep Guppies and Goldfish in one tank:

Although Goldfish are not aggressive, they are voracious eaters and omnivores; meaning, they eat anything that fits their mouth. Goldfish can’t concede to stop eating on their own. So, irrespective of how much and what you feed is never enough. Most Goldfish can grow up to 10 inches (30 cms) in an aquarium tank; in an outdoor pond, they can grow up to 19 inches (50cms); the bigger they grow lesser the chance for your Guppies to survive in the same tank.

When you are housing both Guppies and Goldfish in the same aquarium, be prepared that your Guppy could go missing any day, it’s just a matter of time.

Guppies, also commonly known as Million fish, because readily spawn and breed; Goldfish devour the fry as delicacies and soon start to see your Guppies as afternoon snacks.

Guppies chase each other as a sign of aggressivity, especially during mating season; they are known to nip at each other fins and tails. They don’t stop nibbling at each other’s fins and bite other peaceful species in the tank.

Goldfish being slow and graceful swimmers with defined patterns, while Guppies move swiftly and stylishly: Goldfish becomes an easy target for harassment.

Both Goldfish and Guppies have different dietary needs; however, Goldfish being an insatiable eater, will devour everything you throw in the tank that includes Guppies food. Though Guppies are fast swimmers and grab on their feed with a school of Guppies, you will not be able to keep track of whether or not all the Guppies got their share of food.

Goldfish living in a pond or unheated tank can survive in warm water during the summer months; however, a prolonged period in a warm water environment can stress the Goldfish and reduce their immune system and eventually reduce their lifespan.

On the other hand, Guppies living in colder water below 70°F (21°) will reduce their appetite and activity, thereby lower their immune system and become susceptible to diseases leading to the premature death of Guppies.

How can you keep Guppies with Goldfish?

As I said earlier, every once in a while, we want to have what we want to have; no matter what the difficulties are, we work out a solution to each problem when we want something; similarly, when an aquarist decides to keep both the Guppies and Goldfish in one tank, he/she finds the ways to keep both together thriving.

Choose the type of Goldfish:

Goldfish come in over 200 different sizes, shapes, fins, tails, colors, etc.; choosing the right kind to live with your Guppies is the first step to realize your dream of keeping them both in the same habitat.

The bigger the fish, the bigger the mouth; there is no doubt even the smallest type of Goldfish will outgrow your adult Guppies; it’s only a matter of time.

Big fancy Goldfish such as Orandas, Ranchu, can make a meal out of your Guppies.

You would want to avoid the large and fast-moving Goldfish types to house your Guppies.

Although Guppies are small, they are quick and brisk swimmers. Your Goldfish might ignore them; however, sometimes, the lazy Goldfish might figure out how to capture Guppies; once it starts, then that would be the end of your Guppies tenure in that habitat.

Tank set-up for Guppies and Goldfish:

You would want to choose a larger size tank depending on the number of Guppies and Goldfish you wish to house; besides, it is easier to keep the water parameters stable in a larger tank.

Adjust the water temperature and pH at a common value

A temperature range of 70 and 75°F (21 and 24°C) with a neutral 7pH can keep both Guppies and Goldfish happy and healthy. You would want to install a heater with control to maintain stable values.

A regular, frequent water change is essential to maintain the water’s acidity and hardness; also, it is imminent to keep the Ammonia, nitrite, and nitrates levels.

There is no hard and fast rule for how much water or frequency of water change; each aquarium is unique, depending on the tank set-up, size, decors, plants, and the inhabitation of types and number of species, etc. You and you alone can work out the percentage of water to change and how often through the trial and error method.

You can start with 25 to 30% of water change a week and keep increasing or reducing the quantity and frequency of water change by testing the water parameters every day.

As it is, when you house Guppies, ensure to incorporate with plenty of live plants, driftwoods, caves, tubes, and other decors to make them feel secure and all the more so when you are housing them with Goldfish.

Live plants such as Java fern, Java moss, Anubias, Water Sprite, Duckweed, Water Lettuce, Hornwort, etc., are hardy and low maintenance aquarium plants. Even so, your Goldfish munch on them can’t destroy them entirely as these plants are sturdy and fast-growing.

We know Guppies are a pro at reproduction. They are livebearers; meaning, there are no static eggs, the babies swim right after birth and great at hiding; they can quickly take shelter with plants like Java moss houses the first fry food infusorian.

Although both Guppies and Goldfish are hardy, Goldfish produce massive bio-waste; it doesn’t come as a surprise as we know they are mammoth eaters. Hence, a good filtration system is a “sine qua non” for a tank where Goldfish and Guppies live together.

When adding Goldfish into an established Guppies tank, Goldfish learns to accept Guppies as their inmates rather than eyeing them as a midday snack.

Also, introducing young, tiny Goldfish to fully grown Guppies forces them to accept as their tankmates.

Can Guppies live Goldfish? Certainly, they can live in the same habitat; it all goes down to one thing; that is how diligent you are in preparing the habitat for both docile and graceful species with different needs.

The key is to have a proper tank size with live aquarium plants and decors for the stock, a good filtration system, testing the water parameters regularly, keeping them in check, etc.

All the best! Also, you could share with us here below your experience of keeping both Guppies and the Goldfish.