Skip to content
Both Guppies and Angelfish are popular among aquarium enthusiasts; Guppies are beautiful, colorful, and peaceful fish, and Angelfish are equally attractive and bright color fish; now, the question is can Guppies live with Angelfish?
My answer is no; Guppies cannot live with Angelfish. Guppies are friendly and cheerful fish; they enliven any tank they live in with their beauty, colors, movements, and pursuits. They are naturally a fair inhabitant in any peaceful community aquarium tank; however, an adult Angelfish is by far bigger than an adult Guppy. They are a territorial, attention seeker, and aggressive fish species.
Guppies won’t feel safe in the same tank as Angelfish with their predatorial and aggressive nature. There are several factors to consider keeping both Guppies and Angelfish in the same tank.

Factors to consider while keeping Guppies and Angelfish in the same habitat:

Guppies are beautiful and vibrant by nature and are a delight in any aquarium tank. They are hardy and peaceful community fish species; they blossom with minimum care and remain cheerful and lift the traits of any aquarium they live in. Guppies are easy to care for and are beginner-friendly fish; to breed, they don’t need any extra assistance.

The female Guppy grows to a maximum of 2.5 inches (6.5cms) while males reach a maximum of 1.5 inches (4 cms). Due to their small size, they become the target for other significantly bigger and aggressive fish. Guppies do not attack any other species in their habitat. 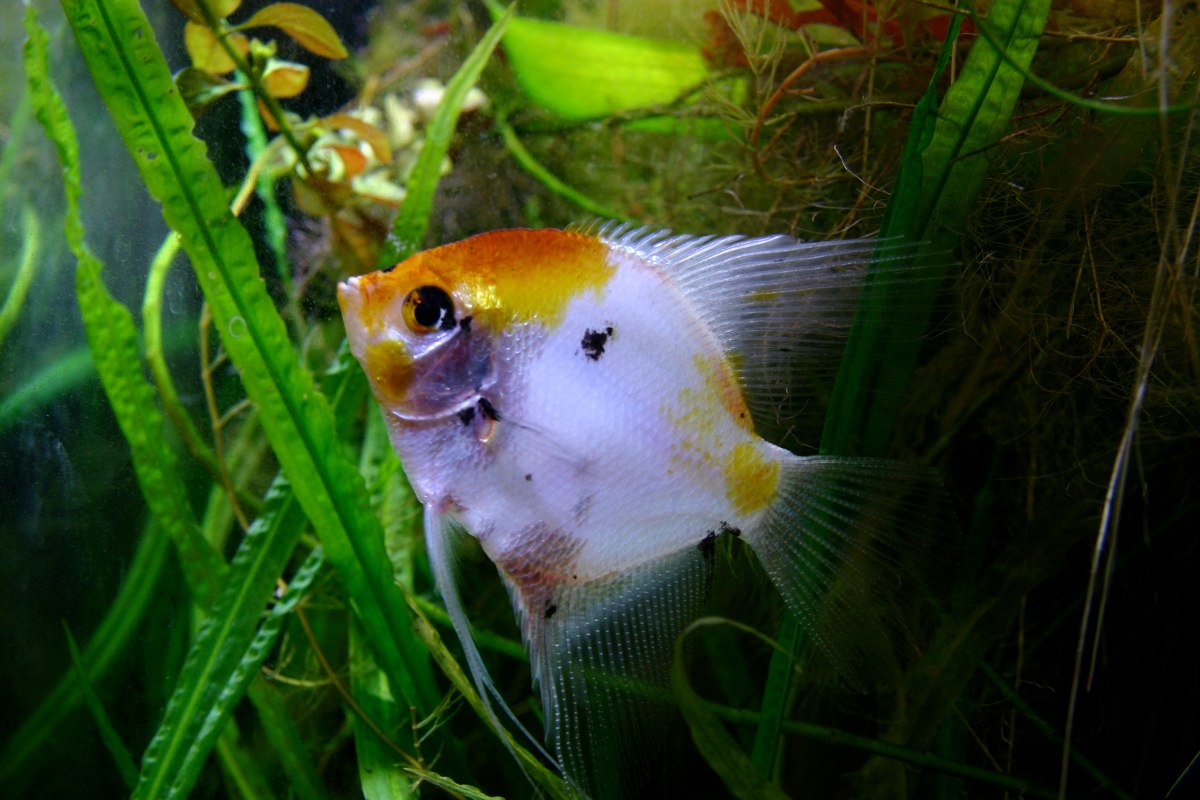 Angelfish are equally beautiful and colorful fish species. They enliven any tank they live with their attributes. They are aggressive and demand attention. Angelfish are territorial would want large space to swim around and do not like sharing the space with other species.
Do not let their angelic look fool you, and they are Cichlids; all the cichlids are aggressive; only the degree will vary, including the peaceful cichlid species.
With the Cichlid background, they tend to attack other peaceful and smaller species living in the proximity and sometimes even kill them.
A fully grown Angelfish measures 6 inches (15cms). The size with their predatory nature makes them commanding and boisterous while living with the other smaller and peaceful, friendly species.

The stress level of Guppies living with Angelfish:

Even though Guppies can survive in the same tank as Angelfish, they will not thrive with the stress and anxiety. A Guppy sharing a habitat with Angelfish undergoes continuous pressure and anxiety. Angelfish will hassle guppies, picking on them, etc. All the energy of Guppies would go in from escaping and avoiding the harassments from Angelfish.

Stress is no good for any living being, including any fish. A stressed specimen will attract all the possible diseases and eventually die well before its usual time.

Reduce the lifespan of Guppies that are living with Angelfish:

Generally, Guppies live up to 3 years; at times, we can find Guppies that live over five years in an optimal condition; good water qualities, stable water parameters, good food combined with good genetics, and a peaceful habitat Guppies can live over five years.

However, we cannot expect Guppies to live with Angelfish even a year. Colorful and playful Guppies will soon take the attention of Angelfish; when the Guppies are menaced continuously, they will incarcerate themselves in small and safer hide-outs; without getting a chance to explore their habitat with their playful and lively nature.

There are good chances with a maximum size of guppies being 2.5 (6.5 cms) inches and Angelfish growing up to 6 inches (15 cms) that Angelfish could eat your Guppy.

Angelfish are predators by nature, and not to forget, they are a species of the Cichlid family. It is known even the young angelfish can hunt down your young Guppies; it will not give them any chance to survive in a small habitat.

Undoubtedly, in the wild, several species share the same habitat, including peaceful and aggressive species. However, the habitat they share is huge waterways with plenty of hiding places such as bushes, rocks, plants, etc.

Even when the small and peaceful species fall prey to the more prominent, bigger, and aggressive species, they still have chances for procreation and proliferation. However, it is not the same in a small habitat, like a home aquarium.

Home aquariums are confined and limited space. The aquarium’s limited space gives a little room for the small and peaceful breeds while living with bigger and aggressive types.

If you are looking to have a harmonious and peaceful aquarium tank, you would want to choose species that will live together carefully after studying each species’ nature and requirements.

If you are looking to add some tank mates to the existing community tank, choose the right tank mates to live within your aquarium tank.

Guppies and Angelfish – Conditions for keeping them in the same tank:

When introducing a young Angelfish into the established Guppies tank, Angelfish learns to accept Guppies without harassing them while becoming an adult. If you do it the other way, then Angelfish will think Guppies are their snack; within minutes, there won’t be any trace of Guppies.

Introducing grown-up Guppies with young Angelfish can help them to leave alone Guppies as they will treat Guppies as other tank mates than their prey. Guppies can swim everywhere, whereas Angelfish is a middle-level dweller; hence Guppies can find their areas to swim around without being bothered by Angelfish, particularly if you have a bigger tank with plenty of plants, Java moss, Java fern, Hortworts, and other decors.

Guppies are hardy, friendly, peaceful fish species. Unlike ember tetra or neon tetra or harlequin rasboras or White cloud minnows, they are not schooling or shoaling fish. However, they thrive best in groups. Guppies swim in every direction here and there, actively. Other Guppies are their best tank mates.

Nevertheless, they can get along very well with different community peaceful fish species. 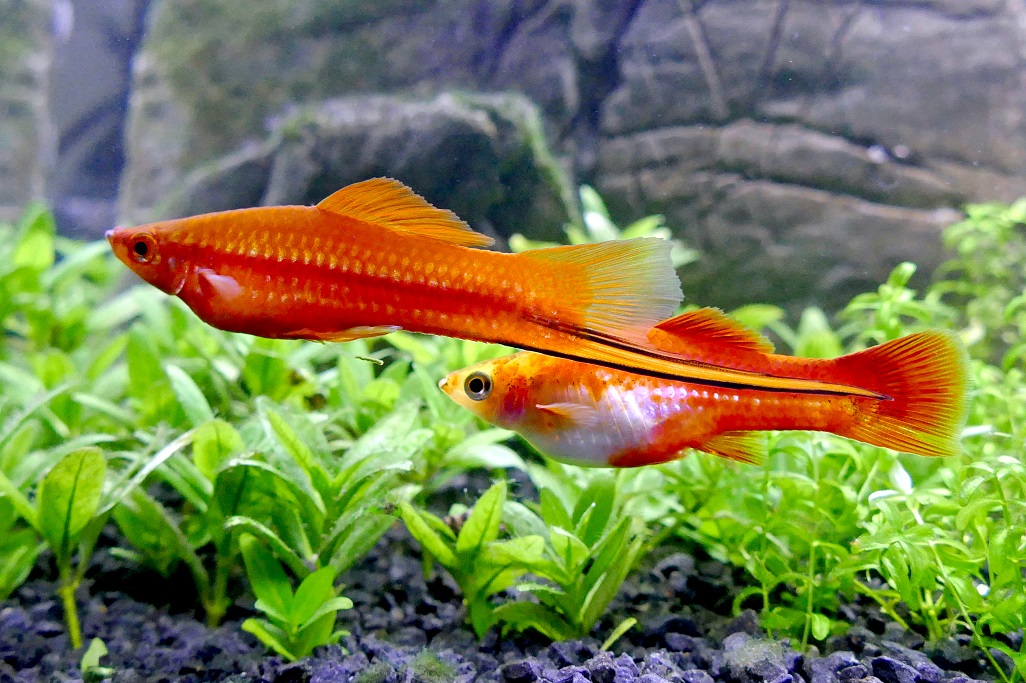 Other Tankmates for Guppies:

You can also keep Shrimps such as Ghost Shrimp, Red Cherry Shrimp, Bamboo Shrimp, Amano Shrimp, etc., with Guppies. They love shrimplets; it’s one of their favorite food like most fish species, of course even for human beings; only human beings eat even giant shrimps like Lobsters. Jokes apart, if you want to breed shrimps, I would suggest you get a small breeding tank. Shrimps are great bottom feeders, especially Amano shrimp, Bamboo shrimp, Cherry shrimp, etc.

You would want to keep your tank well planted with java moss, java fern, Anachari, Hornworts, etc., when you are keeping shrimps, kuhli loach, snails, etc., with Guppies.

Species to avoid with Guppies:

Angelfish: This is our topic; can Guppies live with Angelfish? The answer is no, with exceptions discussed earlier; introducing young Angelfish into an established Guppies tank, keeping them in a bigger tank with plenty of plants, driftwoods, and decors.

Cichlids:  with Guppies, you would want to avoid all Cichlids without exceptions. It is understood as all Cichlids are aggressive and territorial for most Cichlids such as Jack Dempsey, Jaguar, Wolf, etc. Guppies are a meal than anything as a cohabitant.

Endler’s Livebearers: Guppies and Endler’s Livebearers great tank mates; they both are so friendly that they start to crossbreed. If you want to produce a new species, yes, of course, you can keep them both in the same tank; they make great tank mates; however, if you do not want to handle the complication of looking after an entirely new species, avoid to keep them in the same habitat.

Avoid any large and Aggressive fish Species with Guppies:

With their excellent temperament and friendly attitude, guppies make wonderful tankmates to most of the peaceful freshwater species.

However, avoid having any large species that has a mouth big enough to fit Guppies. Also, you would want to avoid all the aggressive nature fish species such as Pufferfish, Cichlids, Red Tail sharks, etc., with Guppies.

Even Tiger Barb has a reputation for exhibiting mild aggressivity and is also known for its fondness for flowing fins and bullying docile nature fish species.

Both Guppies and Angelfish favor the aquarists; Guppies, with their colorful, peaceful, friendly nature, are adorable, and Angelfish equally beautiful and with boisterous attitude add a character to any aquarium tank.

Nonetheless, if you are looking to establish a peaceful community aquarium tank at home, I would suggest us asking the question can Guppies live with Angelfish. You would rather not have them in the same habitat. It’s the best for all the dwellers in the tank.