Skip to content
Goldfish are infamous for eating anything and everything that fits in their mouth; they are always hungry; under these circumstances, when you run out of fish food and have only a loaf of bread left in your pantry, the exact question that comes to your mind is, can goldfish eat bread? But is the bread the right food to feed goldfish?
Bread usually serves as a quick full meal for us, but is it equally healthy for feeding a goldfish? You often must have seen people throwing leftover bread pieces in the goldfish or any fish pond. Of course, it is because goldfish can eat bread; however, is this age-old practice of feeding bread crumbs to goldfish or any other aquatic animals safe?
In this article, can goldfish eat bread? We will read in detail whether it is advisable to feed goldfish with bread, why it is harmful to provide your goldfish with bread.

Can goldfish eat bread and breadcrumbs?

Goldfish are omnivorous by nature. In other words, goldfish eat both vegetal and protein-rich animal foods; hence bread is no exception to this. Therefore, when you bring a goldfish to your tank, most aquarist shop owners will suggest feeding your goldfish with fish pellets, brine shrimp, small fishes, blood worms, etc. Besides, you can also feed them with blanched veggies, such as lettuce, carrots, zucchini, broccoli, etc., which can provide them balanced nutrients.

But the problem occurs when you fall short in fish food supplies and have nothing to feed your goldie except for a loaf of bread. It is not a bad idea to feed your goldfish with bread when you run out of food occasionally; it is a common practice to throw bread pieces in both public and private ponds. However, feeding them with bread crumbs in a large quantity and regularly can cause indigestion and intestinal disorders.

You would want to remember bread contains yeast and is rich in gluten which is challenging to digest for the goldfish. Moreover, the bread has low nutritional value composed of heavy substances which have no nutritional benefits to your goldfish.

What happens when your goldfish eat breadcrumbs?

Goldfish can eat most food for a short period; now, coming to your question, can goldfish eat bread? The answer is definitely yes. As goldfishes are omnivorous, they eat any food you give them without any qualms. So, they will also consume bread if you give them.

But is it good to feed them with bread?

No, you cannot feed them with bread; because it contains yeast, a leavening agent helps the fermentation process by producing gas that makes bread rise. So, when the goldfish eat, it continues to inflate in their stomach; even we humans experience the bloating effects sometimes. Yeast is present in most food, and it is a natural enzyme that helps keep the digestive system in balance.

However, in the bread, adding additional yeast to accelerate the fermentation process creates this bloating. In addition, the presence of gluten damages the lining in the digestive system and promotes bloating along with yeast.

You wouldn’t want your fish to have digestive issues; glutenous insoluble fiber combined with yeast promotes indigestion and constipation in your goldfish.

Also, gluten combined with yeast causes other health complications like swim bladder disease. Bloating creates difficulty in swimming and inertia in your fish; the fish will not move and spend most of the time at the bottom of the tank.

Long-term bread feeding can also lead to organ failure; One of the three causes of Dropsy is poor nutrition. Dropsy is a pathological condition where the organ tissues swell up and accumulate excess water and eventually leading death of the fish. 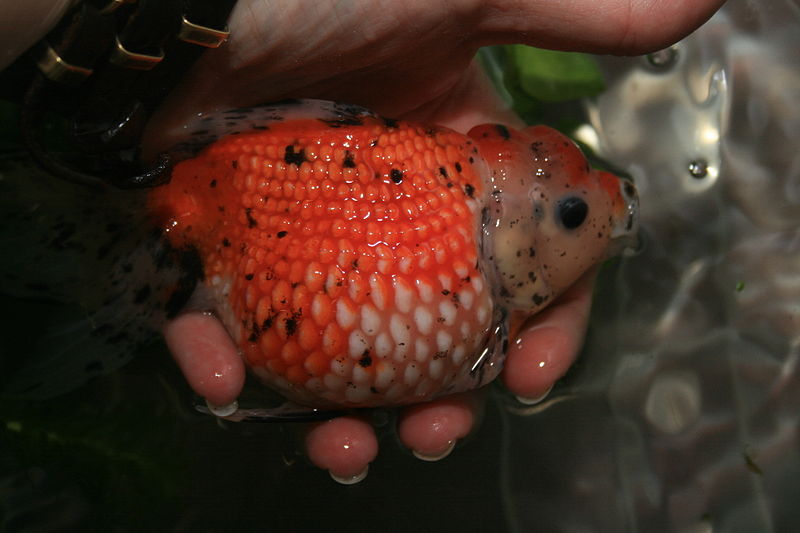 What if you fed your goldfish bread?

Suppose if you have fed your goldfish with bread before reading this article, try not to panic; increase the water temperature slowly and gradually up to 80°F(26.7°C) and add approximately two teaspoons of Epsom salt for every 5 gallons (19 liters) of water. Epsom salt relaxes the muscles and thereby accelerates the digestion process; slightly elevated temperature boosts the metabolic rate, thus boosting digestion.

You can also feed some blanched veggies like cucumber, peas, zucchini, etc., which increases the soluble fiber and aids digestion.

What if you have been feeding your goldfish with bread, and nothing wrong happened?

Goldfish eat anything you feed them, and most of the time, they may not exhibit any ill effects immediately. However, while your goldfish is gulping the bread crumbs you are throwing in their habitat, it continues to damage their intestines. With time, it will start exhibiting symptoms. How long it takes for goldfish to show ill effects depends on the species; some species, such as common goldfish, have a much stronger digestive system than the fancy types of goldfish.

What do you feed a goldfish when you have no fish food?

Feeding a goldfish is very easy. But do you know what is more attractive? Even if you don’t have any ready-made market-bought fish food at hand, you can easily give them homemade foods that are easy to prepare and healthy.

Goldfishes readily accept boiled vegetables. So you can feed them peas or finely chopped spinach, lettuce, cabbage, kale, etc. Also, some seafood like white fish or shrimp is a great option to feed them. However, while feeding seafood, it is better to go for frozen one than fresh seafood to avoid contamination of bacterias, viruses or parasites, etc.

What human food can goldfish eat?

Though goldfishes love to have rich fish foods regularly, it is vital to make some changes in their diet from time to time. Changing the diet helps them have healthy nutrition.

Here below are some common human foods that are safe to feed your goldfish, and they love to eat.

Though grains are not recommended for feeding fish, there are no restrictions about them having rice. Yes, goldfish can consume rice without any trouble, unlike bread. However, they do not get any nutritional benefits from eating rice.

Besides, while feeding rice to your goldfish, make sure it is adequately cooked so that it doesn’t expand within themselves as they eat it.

You may have doubts regarding, can goldfish eat bread, but you should not be reluctant to give oatmeal to your fish.

Oatmeal must not be their primary food, but it can be a once in a while healthy snack for them. Feeding your goldfish soaked or well-cooked oatmeal is also a good option. The good thing about feeding oatmeal is that it contains a good amount of soluble fiber and balanced carbohydrates, protein, and fat contents.

These omnivorous fish can eat vegetables; also, goldfish can benefit from eating veggies. Therefore, it is a good practice to feed a portion of their meal with veggies to add enhanced nutritional value to their diet.

But, ensure the vegetables are blanched before feeding them; veggies like carrots, spinach, kale, radish leaves, turnip greens, peas, cucumber, broccoli, brussels sprouts, zucchinis, and lettuce are some options.

Well, fishes are not much fond of fruits. But as goldfish are always hungry, they don’t mind if you give them some fruit slices.

You can feed them fruits like apples, grapes, berries, mangoes, or pears. However, ensure to blanch the fruits before feeding them to your pet.

Raw fruits and vegetables are hard to digest and can pollute the tank water.

Well! The goldfish’s health and growth primarily depend on what you are feeding them—also, the dazzling goldfish shades and colors depending on the food they consume.

Thus, it is essential to make sure that you give them only nutritious foods and avoid those considered harmful to their health. Well, here, I enlisted a few of such food items that you would want to avoid feeding your pet.

Though we love to fill a large portion of our platter with healthy grains, the same is not valid for your goldfish. There is a lot of debate on whether to feed your fish with grain foods in the fish world or not.

Well, the anglers have been offering fish with grains for a long time without any problem. But some people argue that it is very unhealthy for your goldfishes.

Grains and cereals are not a natural part of the goldfish diet; grains like corn, rice, wheat, barley, etc., can cause digestive disorders in your goldfish.

Crackers can swell up in the intestine of your fish just the same as bread, causing severe blockage issues, leading to its death. Moreover, goldfish are fond of eating, which keeps causing digestive-related problems in them.

Most vegs are a healthy option for your omnivores goldfish; however, raw vegetables can be hard to digest, build gas in them, and also decaying of uneaten raw vegetables and fruits can foul the tank water and thereby increase the ammonia and nitrites more than the existing good bacterial colonies can cycle.

Also, fruits and vegetables contain chemical residues such as pesticides, insecticides, fertilizers, etc., that can alter the water parameters that are not conducive to your fish.

What can you feed goldfish?

To keep your goldfish healthy and maintain their bright color, you would want to provide them a diet that varies in nutritional values.

Goldfish is a much diverse group. However, what is more, interesting about them is that most of their varieties tend to eat similar kinds of diets.

Goldfish are omnivores that eat both vegetable and animal foods. Thus, while deciding the diet for your goldies, make sure you are including both types of food.

In their wild habitat, goldfishes typically get access to algae and a wide variety of plant matter, which grows in their surroundings. So, you would want to replicate the tank with a substrate where algae can grow on itself to serve as a part-time meal. It will act as the primary source of food unless your fish are given something else to eat. However, that should not be bread!

Live foods like ghost shrimp, daphnia, bloodworms, and brine shrimp are good protein-rich sources for them. Also, your goldies can eat snails, which keep them healthy. However, I would suggest you go for frozen protein supply to fresh bloodworms or brine shrimp to avoid transmission of infections.

Nonetheless, at the same time, a vegetable-rich diet can give them proper nutrients. So, here, I have mentioned a few foods that you can offer your goldfishes at ease.

What to feed your pond goldfish?

Feeding every day your aquarium fish is perhaps necessary, but that doesn’t hold good for your pond fish. A pond is an ecosystem in itself that sustains various lives other than your goldfish.

You can feed your pond fish once in a while to comfort yourself but not daily. Goldfish, as we know, eat continuously, whatever you provide, they have an enormous appetite, but that doesn’t mean you keep feeding them to their demands. All that they need to survive is produced in their habitat. So instead, you can plant some edible and inedible plants that can sustain them while keeping the pond clean and well oxygenated.

Goldfish get their protein supply through mosquitoes and other insects; occasionally, you can treat them with dried daphnia, micro worms, shrimps, etc., and most certainly, please do not throw your leftover bread in the pond.

Goldfish are always hungry and eat anything that fits in their mouth; the bread is not an exception. However, that doesn’t mean you feed them with the bread because it is readily available.

There are more cases of fish that have died of over-eating or eating wrong food than of hunger. Your goldfish can go without food for a few days in a row. So, if you run out of your fish food and you do not have access to any other above mention edible food, then it is better not to feed them at all till you get to access your fish food or some of the human food that is acceptable and nutritious to your goldfish.