Can a Turtle Live Without Its shell?

The answer to your query, can a turtle live without its shell, is pretty disappointing! The truth is that tortoises and turtles cannot live without their shells. However, to understand the magnitude of your question and the simple answer, firstly, you would want to understand what is a turtle shell is made of and how it is formed.

The shell of a turtle is a part of its exoskeleton. These creatures are born with their shells, which are in-built armor for their body; they cannot slide in and out of their armors. Unlike other crustaceans and reptiles like shrimps, snakes, etc., they don’t molt; it grows with them, and shells get harder and stronger as they grow.

The shell is the typical part of their anatomy that sets them apart from the other aqua and terrestrial species. It results from millions of years of evolution; a fossil larger than a double bed dates back to 228 million years, evidence confirming that the turtles and tortoises once lived without shells.

It might even surprise you if I tell you that their shells have nerve endings, meaning they can feel your touch. We think their shells are the same as our hair and nails, a dead part growing out of the body. In reality, the shell is as indispensable as our skin to us.

Why Do Turtles Have Shells?

This recent discovery of the fossils from Eunotosaurus Africanus is considered missing links between the previous fossils of the non-shelled turtles and the latest shelled ones; it also bridges the morphological gap between the turtles and the other reptiles. Thus, this fact helps in determining the evolution of the turtle shell.

A shell in turtles and tortoises is a shield from defending itself from the predators; however, a study lead by Dr. Tyler R. Lyson from the Denver Museum of Nature and Science reveals that the thrust for the development of the shell is to burrow; burrowing facilitates the turtles plunge into the aquatic environment. Though it may not be a definitive answer, this new concept still calls for further research on turtle shells.

Eventually, this carapace has become a protective sheath from its predators. The well-constructed, tall, and rounded shells of land turtles and tortoises are hard enough to prevent any predator from attacking them or eating them away. These rigid shells are almost impossible to scratch or chew by most predators.

On the contrary, sea turtles come with comparatively softer shells but give enough protection to fend off attackers trying to take a bite of them. 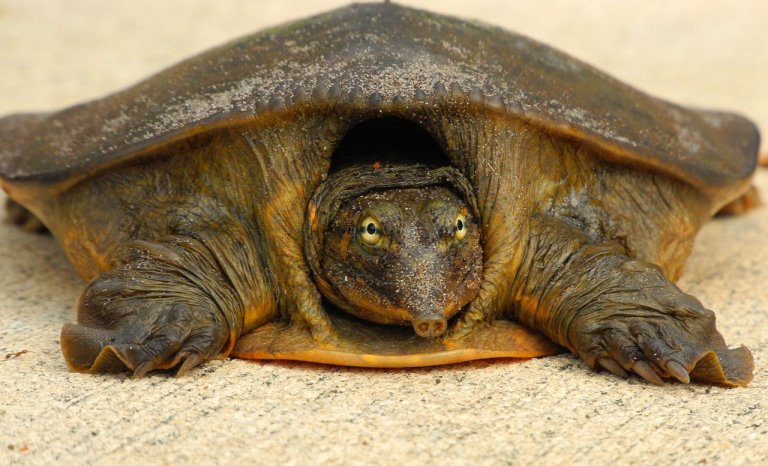 Researchers have also found strings of the claw in the fossil, suggesting that the shells may have evolved to dig into the mud for food or dig inside the sand in search of protection from coldness, wind, heat, etc.

Why Can’t a Tortoise or a Turtle live without their Shells?

No, a tortoise or a turtle can never get out of its shell; however curious you may, never try to force them out of their armor as it will give them unbearable pain and eventually kill them.

Although they cannot get out of their shell, they can quickly retract their limbs and head inside. Yes, you heard that right!

Turtles have the brilliant power to go inside their shell and close it tightly so that none can get into them and harm them. It’s like a mobile house that they carry all their lives.

The reasons why they can’t live without their shells:

Even though anatomically, the carapace has evolved to dig eventually, the ribs broadened and flattened over a period; and its purpose has dilated to become a protective layer to defend itself from its predators.

The absence of rigid ring bones around the edge of the carapace in some turtle species such as leatherback, softshell allows their shells to squeeze so tightly, so much so preventing anything from getting inside.

Hence, a turtle cannot survive without its armor, which has taken millions of years to make.

It is part of their skeletal system; the hard shell is a fusion of 50 bones, ribs, shoulder bones, and vertebrae. Firstly, the ribs broaden, and the vertebrae form an outer layer.

The plastron is the ventral or belly part of the turtle that includes anterior and posterior bridge struts and the shells.

Calcium and vitamin D deficiency affects the shell’s wellness as it affects the bones and skin of humans and other species. A turtle without its shell is equivalent to you living without your spine, rib cage, and 50 bones.

A piece of good news concerning the turtle’s shell, veterinarians, have succeeded in developing 3D-printed prosthetic carapace, the same as prosthetic limbs and joints.

It is their skin

Turtle’s carapace is enveloped like tectonic plates. These plates are known as scutes, dermal plates, the layer of vascular skin. The shells cover, the scutes are made of Keratin, the same element your finger and toenails are made up of; they protect the dermal plates from scratches and bruises.

With time, the scutes shed and grow new layers in the turtle by overlapping sutures for additional stability; however, tortoise never shed their scutes; instead, they keep growing, overlapping thicker and thicker as they age.

However, not all turtles have the scutes to shed; for instance, sea turtles have a softer shell; it has a leathery texture that helps them gliding in the water effortlessly.

Protection from the Heat

The turtle and the tortoise shells protect the whole body from overheating and dehydration under direct sunlight. The dark color of the armor is excellent for absorbing sunlight and heat.

To combat bacteria, viruses, and fungus, the turtle and the tortoise need sunlight; however, their internal organs will quickly dehydrate in the sunlight before absorbing enough heat for their body to function without their shells.

Vitamin D is essential for all living beings; the turtle is no exception to this. The scutes in the turtle shell absorb UV rays and synthesize vitamin D. Vitamin D deficiency results in metabolic bone disease the same as human beings. Therefore, turtle or tortoise cannot live without their shells.

What Happens if a Turtle Loses its Shell?

A turtle’s shell refers to a dome-like structure made of skeletal and dermal bones that encloses its vital organs. So, if a turtle loses its shell, it will lack the essential organ needed for its survival; thus, leading to its death.

As already said, there is no safe way to remove the shell of a turtle. Yet, one can forcefully remove it by making the innocent creature undergo a painful surgical operation. Although the turtle will be detached from its shell, it will not survive the surgery; even if it manages to survive the procedure, it will die in under an hour with all its body parts exposed.

The fact is that the turtle is not an organism, who lives inside a void shell, like a hermit crab. This reptile is innately born with a shell-forming skeletal structure, making it impossible to get them detached from the shell, and they cannot even survive without it.

Are Turtles born with shells? When do they get their shells?

Can My Turtle Drown?

What is a Paludarium?

What Does a Turtle Look Like Without a Shell?

Well, without the shell on the body of a turtle, you will be able to see its organs and internal structures. Also, it will make their body get exposed to air, bacteria, and predators.

However, if you look closely at its ancestors, Odontochelys Semitestacea, dating back to 220 million years ago that had no shell, you can see its ribs, along with a broadened body. The lower rib of the creature had a plastron with an undeveloped carapace. This ancestral turtle looked similar to Chelonians, and our modern-day turtles would look somewhat similar if they didn’t have a shell.

Can a Tortoise and Turtle Live with Broken Shells?

Well, technically speaking, the answer is YES! Turtles and tortoises can live with a broken shell. A broken shell will not bring in their immediate death. However, the situation can get serious if it is not appropriately treated.

A cracked or a broken shell of a turtle exposes its body to a certain extent, threatening its health; injuries in its shell can cause major infections if they are not paid immediate attention to.

However, the cracking or breaking of a turtle’s shell always does not occur due to an injury. It can also happen due to a poor diet and dirty tank water conditions. It can even cause ulcers on their shells, leading to shell rotting.

Besides, the lack of calcium and inadequate sunlight can form many abnormalities in their shell, leading to their breakage. Thus, if you pet a turtle or tortoise, it is important to supply them with a proper diet and maintain their habitat appropriately.

Mostly, the turtle shell cracks or breaks during or at the end of the hibernation; hence, it is paramount to watch them closely during their hibernation; so that you never have to brainstorm yourself to know can a turtle live without its shell or not.

Do Tortoise and Turtle Shells Heal Themselves?

Well, the world is full of surprises. Like all living beings, including human beings, have the intelligence to heal oneself if we don’t meddle with it much. Likewise, even if a turtle develops an injury or damages its shell, it has the magical power to heal itself.

But how is that even possible for a hard object to get healed on its own? A turtle or tortoiseshell is made of organic and living matter that renders it the ability to heal itself.

However, with a pet turtle, you would want to give appropriate treatment for its broken shell. Take the turtles to the vet, who can ease their healing process by sealing the fracture and the medications.

Can a turtle live without its shell – Wrap Up

The turtle shell is not just for protecting itself from its predators; it has several bodily functions to perform for their existence.

You can help your pet turtle or tortoise by feeding and keeping its habitat appropriately; keep a close watch for any changes in the shell, especially during its hibernation.